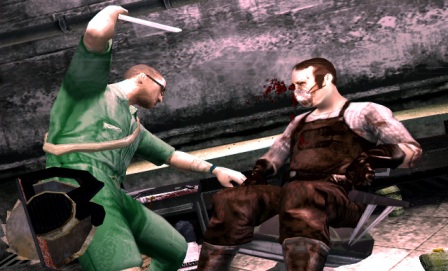 Curiously, I think I was more elated than disappointed when I heard of Manhunt 2's UK ban (and latterly it's as-good-as-banned AO rating in the US).

It was not a knee-jerk reaction to a recent news story. It was not because of real world environments within the game (see Sony's Resistance woes). The game was not guilty of offending ethnic minorities. The BBFC statement did not even mention a concern over copycat killings (although "unjustifiable harm risks" sounds disconcertingly ambiguous).

No, it seems like this videogame has been banned on its own merit, so-to-speak. Rockstar set out to make a provocative and unsettling psychological drama, and have succeeded in the eyes of the world's media and key regulatory boards.

An odd compliment? Not really. I think many of those who played and appreciated the original Manhunt might also have felt a little pang of excitement to see the disturbing power of its vision recognized. For me it is another sign of how far games have come. Though certainly gruesome, Manhunt was not a game of shock and bad taste for its own sake. The real impact of that game came from the "unremitting bleakness" of its snuff movie setting, and the way it questioned the gamer's pleasure and voyeurism in a game about "stalking and brutal slaying". 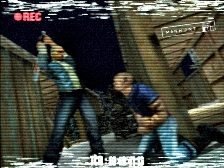 Those quotations actually come from the BBFC's Manhunt 2 statement, and indeed they themselves admit that the second game does not push the envelope too far beyond what we were playing 3 and a half years ago. Yet that in itself is a justification of the details that have been taken into account with this decision.

The key areas of contention seem to be regarding "the lack of alternative pleasures on offer" and "the different overall narrative context". The former sounds a little too much like a design criticism to me, but the latter shows evidence that the first game's satirical bent and non-interactive execution scenes were taken into account by the board, and that the sequel (which seems to have ditched these subtleties) has less contextual merit to bolster its snuff elements. It is this kind of thoughtful criticism that I think demonstrates a respect for the integrity of the medium, even if in this case it has worked against the game in question.

Interestingly, it is the Wii version that is likely to have proven most controversial, yet the classification boards have still made no allowances for the PS2 and PSP versions. Was this perhaps a political decision, to avoid controversy focusing solely on the motion-sensing element? Or is the core game genuinely deserving of such a hard line reaction in itself? (Check out the BBC video link here for a brief discussion of the Wii version.) 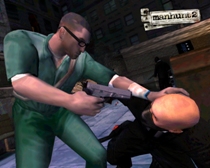 I should at this point state that on the evidence provided so far, I do not agree with the decision to ban the game. I have not yet played the game and as a fan of the original would very much like to.

But if censorship is to be enforced, let us take some solace in the fact that videogames are to be evaluated on their own terms. I think that to compare the Manhunt games to similarly extreme films, as many upset gamers are quick to do, is to do the medium a disservice, and to underestimate the role and the value of interactivity in such games. You wouldn't expect any film board to pass an unflinchingly accurate movie adaptation of the novel American Psycho, and I think that marking games out as a unique medium in the same way is sensible (although it may not always work in our favor as gamers). 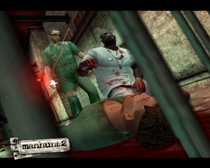 I hope that the considered approach the regulatory boards have taken towards Manhunt 2 will live on in the minds of developers making similarly contentious games. Is that a vote for self-censorship? Well, I'm for anything that makes developers think more carefully about what they are putting into their games and why. But more likely, if platform-holders refuse to license AO-rated games and major retailers refuse to stock them, then this latest example (like the absurd 'Hot Coffee' fiasco) is only going to scare developers from entering controversial territory in the first place.

Still, if we consider that the last game the BBFC banned was the risible Carmageddon (10 years ago), I for one think Manhunt 2 shows that both the medium and the game censors have matured considerably. And even if the game is never to be released, perhaps through the reaction to it we can glimpse something of what Rockstar are trying to achieve with the series: thought-provoking and uncompromising gaming from creatives who will accept intellectual responsibility for their output.

I found it interesting that you said MGS3 “made you” think about the role reversal, and Fight Club “made you” step back and reconsider the situation, but that my interpretation was voluntary, and not sanctioned or somehow enforced by the author as it were. But that’s okay, that’s just how you read and reacted to those texts. I don’t really want to start a subjectivity vs. authorial intent argument. As audiences and critics, I think if we find something that strikes a chord with us and take a moment to consider it and what it means to us, then that’s… Read more »

Thanks for the response, Andrew. You’ve clearly thought about this thoroughly. Your explanation is valid and your gameplay example (and the questions it raises about the motives of the player) is a great one. I do see what you mean by questioning the motives of the player. However, a distinction needs to be made, as to WHO is doing the questioning. Is it the developer or the player? I am not really convinced that the developers intended to question the motives behind the killings. Now I do agree with you that the players are meant to be voyeurs, because I… Read more »

My comment was that Manhunt tried to satirize the simple slasher thrills its sequel seems to be more conventionally preying on, which was my kind of blunt way of saying that Manhunt 2 appears to have lost the intelligence and satire of the original. But you’re right to call me on it because that’s not the real target of the satire. Since you ask, I thought the first game’s “satirical bent” (as I put it more eloquently in the article) was towards reality TV and its audience’s thirst for ever more extreme and lurid thrills. It took that desire for… Read more »

Very interesting article, Andrew. I like your point about gamers defending games by comparing them to movies, in that games are not movies and have that oh-so-important characteristic interactivity (although all media are really interactive, but that’s another discussion). I played the first Manhunt all the way through, and I agree with Mike Bracken (the 2nd opinion review) that it does have a lot of solid stealth gameplay. However, I did not get the impression that Manhunt was attempting to be a satire of slasher thrills. In satire you are attempting to expose faults; satire ridicules and scorns. I don’t… Read more »

Nicato: “Just because it was wrong for the game to be banned in the UK doesn’t make Manhunt 2 a Rembrandt.” I’m certainly not suggesting that. From what I’ve heard the game has none of the self-aware ingenuity of the original, which is one of the reasons the BBFC gave for disapproving of it (comparatively). And it’s also one of the reasons it’ll be hard for Rockstar to overturn the ban. It’d be a shame if Manhunt 2 turns out to be a validation for those who thought the original was a dumb gore-fest, as it’ll probably eclipse it in… Read more »

I think Manhunt is made in bad taste with the sole purpose of shocking people, but I strongly disapprove of government censorship. I think Sony and Nintendo do reserve the right to turn down any game they want, but I don’t fully endorse the idea of an AO rating (the consequences of which result in an virtual ban, having no space on Wal-Mart shelves). In an ideal world, I suppose adults would be free to evaluate Manhunt 2 for what it was and base their opinions on it freely. Alas, this is not that world. What frustrates me most, however,… Read more »