Created by Masaya Matsuura, the man who pioneered music-generated gaming in Vib Ribbon, Musika is certainly the most baffling game of the four. Not because of any exciting Japanese weirdness or ultra-tough difficulty (both staples of old school rhythm action), but simply because there appears to be no game here.

What there is is a ‘spot the letter' challenge in which you press the main iPod button if the slowly materialising letter that appears onscreen is to be found in the title of the currently playing song (which, in a bizarrely uncertain bit of design, is partially visible as it scrolls along the bottom of the screen). Doing this increases your combo multiplier, as does skipping any letters that appear but are not in the song title. Aside from a few perfunctory power-ups, that really is it. It's basically a dull word and memory game played along to a soundtrack of your choice. 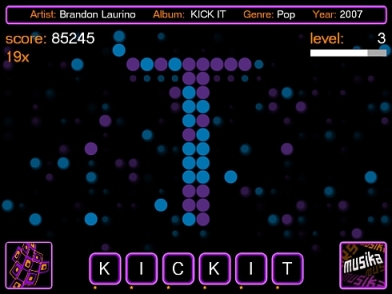 With the difficulty dependent on how long a song is versus how long its title is, you would think there was an interesting element of user-balanced challenge involved, but its wild song-to-song fluctuations really only serve to highlight the imbalance and arbitrary basis of the central mechanic. Sensibly, songs with a long title will wield higher potential scores, but you still feel that choosing the right song is half the game and that too often the actual gameplay boils down to pre-emptive presses and good fortune.

While the cheesy visual effects occasionally spice up the letter-recognising ‘action', it does not take long for the silliness of the whole enterprise to tire you. I'm afraid this is a cynically simple and dumb use of the iPod that probably took about two days to code and will make a lot more money than it deserves. [Rating: 3 out of 10]