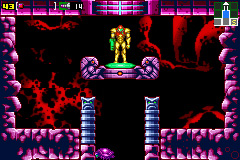 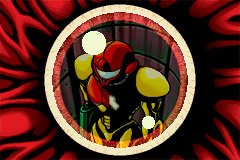 I guess we should have seen it coming. In light of the renewed critical interest in Nintendo's sci-fi series, and the various re-issues afforded to both their Mario and Zelda back catalogues, it's hardly a shock to learn that this latest chapter in the Metroid saga is actually just a smart revision of the original NES game from 1986. What is a surprise, however, is how welcome this update is, and how little it resembles the pointless nostalgia trip it could have been. Borrowing the slick control mechanics and stylish aesthetics of 2002's excellent Metroid Fusion, Zero Mission stands as a timely and more than competent re-telling of the series' origins for those of us eagerly awaiting the next installments.

As ever, our task is to power up bounty hunter Samus Aran's abilities until she evolves into a fully kitted-out, mech-enhanced killer. And, as ever, the game parades a textbook model of Nintendo structuring. The main objective being to simply wipe out all enemy life forms, the game hides its more gratifying secrets below the surface for those who are prepared to dig a little deeper. An intricate network of nooks and crannies awaits the player, gradually becoming more accessible as the omniscient, puppet-master level designers unveil further character upgrades. It's a system of well-managed exploration that has never failed to satisfy, and it remains intact in this dramatically augmented remake.

New areas have been added, new moves can be performed, and there is an unexpected epilogue which impressively extends the scope of the original. Nevertheless, it's the aesthetic touches that make the biggest impact; and very pleasing they are too. The crisp sprites and thoughtfully rendered environments are complemented by a terrific soundtrack, reminiscent of the 16-bit era's finest compositions. The elegant, iconic title music and the wonderful moody synth of the Kraid sector stand out as being particularly evocative of a beautiful but dangerous alien land.

And then there are the aliens themselves. Enemies are consistently revolting; their creepy, insect-like sound effects alone are often enough to bring on a fit of paranoid scratching. They are also well-spaced, varied and pretty easy to dispatch; all of which makes their magical re-spawning tendencies far less of a hindrance to the game than they were in the GameCube's Metroid Prime. This may seem like a minor point, but Metroid games hinge around the player re-visiting previously explored areas with newly acquired powers, and so backtracking from one side of the game world to another needs to be as smooth and painless an experience as possible. Needless to say, anyone whose familiarity of the series begins and ends with Prime will be quite taken aback by just how speedy the game is, and how sweetly the gameplay flows compared to the somewhat hulking realism of the GameCube's first-person behemoth.

Unfortunately, like a kid whose been given too much sugar, Zero Mission's hyperactive pacing ultimately does itself a mischief. Samus is a bullet; and although each room offers a highly satisfying, neatly-crafted spatial puzzle, we fly through the game at such a rate that the satisfaction never really has a chance to register before we're already knee-deep in the next area. As if to stave off more rumors of back-catalogue-plundering stinginess, Nintendo have been overly generous to us in Zero Mission, allowing for most gamers to plough through to the finale in less than 5 hours of play. Quite frankly, it's easy. 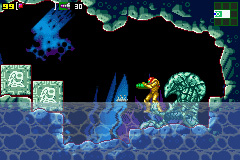 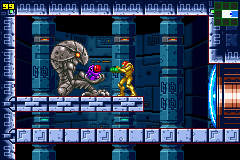 The lack of challenge will be a real blow to anyone who enjoyed Fusion, and the sense of drama that its difficulty spikes imbued in the gameplay. Seeing Samus run and jump with such consummate ease through the terrain of Planet Zebes just feels a little unsatisfying, and occasionally gives the game a feeling of mediocrity. Ok, so Fusion's bosses were a bit of a nightmare (no pun intended), but on reflection they did serve a valuable purpose. Knowing that those mighty leviathans were lurking somewhere in the undiscovered quarters of the space station made the player more aware of their fragility, and imbued the atmosphere with a sense of dread not unlike that found in survival horror games. And for all this, Fusion still never betrayed its platform roots, or its exhilarating pace. By contrast, Zero Mission never quite achieves the same air of menace. It entertains, yet feels curiously unfulfilling. Admittedly it's working from an 18 year old template, but the fact remains that it will initially feel noticeably lightweight to anyone accustomed with the series.

However, once it has been completed Zero Mission improves in a number of ways. For starters, the original Metroid is unlocked—incidentally, this should become a law for all videogame remakes—and subsequently reveals the new version to be a practically flawless update of what is now a sparse and rather awkward playing experience. Zero Mission's slick production values were never in doubt, but it takes a reminder of its humble origins to fully appreciate the craft evident in its construction. Consequently, both games make more sense when played alongside each other, and together they make for a wonderful overall package. The best, however, is still to come.

As impressive as Zero Mission might be as an update, it's in 'Hard' mode (also unlocked upon the game's completion) that the game really comes into its own. Reminiscent of Fusion's difficulty (only with slightly more well-balanced boss encounters), Samus' increased vulnerability really does significantly enhance the experience. The small enemies that she used to simply run past (or even through) now offer engaging little battles at every step; the frequency of the save points begins to make sense; the short cut-scenes wield more dramatic credibility; and collecting the upgrades is that much more satisfying because we know Samus actually needs them. It raises the stakes, and in doing so infects the atmosphere with that survival horror sense of dread we were talking about earlier, where every new room is approached with an irresistible mix of apprehension and excitement.

In these days of one-size-fits-all-games design, it's not common to find a title harangued for being too easy, but it's far from a redundant criticism. Although Zero Mission's overwhelming quality wins out in the end, the first play reveals a game that's just too slick for its own good, toeing the fine line between a fun, streamlined experience and a hollow, transient one. It's a shame, because Nintendo needn't have been so generous with the difficulty level, they had already spoilt us with a superlative remake and yet another excellent Metroid game. [Rating: 7.5 out of 10.]

Parents can rest assured that whilst the atmospheric, sci-fi settings are certainly creepy, they're offset by the game's largely non-stop action quotient. Besides, the aliens are more ugly than they are scary, in the same way that the violence is more slimy than it is gory. Although the game does revolve around weapon-based carnage, it's all framed within a harmless context of space fantasy.

Casual gamers need not worry, thanks to the game's allowance for swift and fairly easy progress.

More experienced gamers and fans of the series will be happy to discover that, upon completion, they can look forward to the challenge of playing an unlockable 'Hard' mode, as well as the original Metroid on which the game is based, before endeavoring to uncover every devilishly hidden item for that super-satisfying 100% completion rating.

One last word of advice: GBA gamers who are lucky enough to be blessed with an SP machine ought to try playing Zero Mission in the dark. It might feel a little silly at first, but it genuinely adds to the experience. Handheld games don't get much moodier than Metroid.

Deaf and Hard of Hearing gamers will be at no disadvantage throughout Samus' adventure, since all necessary information is displayed visually.