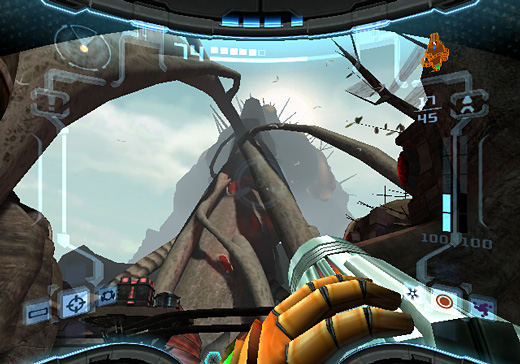 Metroid Prime was the Nintendo success story of this generation, resurrecting the series (which has famously underperformed in the East but thrived in the West) at just the right time and in just the right way. Sandwiched between the hesitant critical praise that greeted both Super Mario Sunshine and The Wind Waker, Prime offered the most convincing reason not to write-off Nintendo as a major player in the industry, and served as stone cold proof that it had more to offer a contemporary—and crucially, Western—audience than the same old elfin quests and cartoonish jumping games. This sequel, pre-empting a new wave of similarly high-profile, mature exclusives like Resident Evil 4, Killer 7 and the newly re-imagined Legend of Zelda game, has perhaps less of a point to make, but it has a still significant legacy to uphold and consolidate, and that's exactly what Retro Studios have done.

That little has changed in two years is a testament to how excellent the core ingredients of Prime were in the first place. The map is still flawless, as is the first-person platforming, as are the camera transitions, etc. Disappointingly, the newest feature is a rather old one: namely that there is a light world and a parallel dark world (or "Aethers," for the pedantic) between which the player must travel in order to fully explore the dimensionally split planet that is the game's setting.

The interplay between the light and dark worlds may not be as incisively explored as in the best exemplars of the mechanic (Nintendo's own A Link To The Past or Ocarina Of Time for instance), but thanks to the unfailing technical brilliance of young Retro Studios in virtually every aspect of audio/visual game design there remains a palpable and worthwhile sense of contrast between the two. The inky Dark Aether is suitably hostile, with a poisonous atmosphere that saps Samus' energy when out of range of the (slowly) rejuvenating light crystals. Although the Light Aether is less impressive, feeling perhaps overly reminiscent of the first game's environments—Chozo Ruins and Tallon Overworld are strongly "referenced." Nevertheless, the mechanic comes across as more than just a way of artificially increasing the title's explorative depth by complicating the exploration process; it is integral to the whole feel and atmosphere of the game, communicating the world's otherworldliness better (and faster) than even Metroid Prime—if perhaps at the expense of some of Tallon IV's more organic feel.

Technically it's a marvel, the magnificent graphics almost too rich and sumptuous to take in all at once. Lavishly decorated rooms, assiduously detailed fauna, blinding (sometimes literally) spot-effects. (Yes, you still get to see Samus' reflection in the HUD visor.) And though the tunes may lack some of the bite and thematic distinctiveness of those in Prime (like the unforgettable bolero stomp of Magmoor Caverns), audio design is generally flawless and never intrusive unless it needs to be.

Speaking of intrusive, scanning has been made a little more bearable this time around. Not only is the visor color-coded to make scannable objects more easily identifiable, but there at last appears to be some much-needed dry humour injected into the many descriptions and log entries—Metroid's with food poisoning and misbehaving Space Pirates just add a little Nintendo character to the otherwise po-faced sci-fi landscape. There's no doubt that scanning can be laborious and detracts from more traditional "sight seeing" exploration, but it is entirely validated by its integrality to the experience and the eloquent ingenuity of a system that asks players to read up on the thing they're about to blast/activate. Hand in hand with the brave, economical and superbly calibrated control scheme, it helps ensure that Retro's Metroid still plays quite unlike any other game. 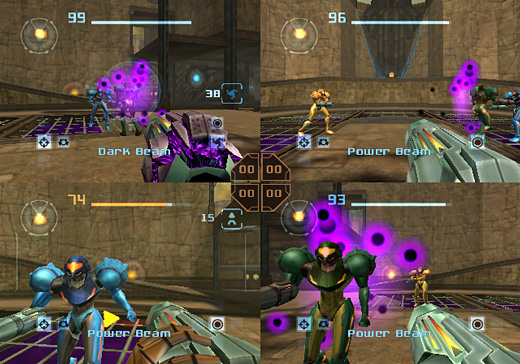 Similarly, combat maintains its typically "Nintendo" feel: strict rules, slightly mechanical, but inherently rhythmic; and all about concentration and timing. It lacks the unpredictability of more dynamic shooters (Halo being the prime—ahem—example) and you often won't fight unless you have to (some enemies seem created just to stall and annoy the player), but the consistency of the system mixed with the superb visual and audio effects combine to bring about fire fights which few can match for intensity and sheer fury.

Echoes pushes all the right panic buttons when it comes to confrontations, and the horrendous screams of some enemies as they reverberate behind the fleeing player are indicative of the rich stream of mature and affecting sci-fi horror that is maintained throughout. At the same time, it's still incredibly melancholic, perhaps even more uncompromising than its predecessor in favoring desolate, dying landscapes over more typically gamey settings (the ice and lava levels of Prime for instance). As ever, you're unlikely to play this Metroid game with a sparkling smile on your face. Mostly you'll maintain a fairly constant scowl—save for the satisfied grin that emerges after decimating one of the game's giant bosses—but that's no indictment of the game. Far from it, it's a rare game that forces the player to take it utterly seriously and become truly involved in the quest of their avatar. When trapped in a room full of Space Pirates, you really feel like you are fighting for your life. When scanning a new area for the first time, Samus' and the player's motivations are inextricably intertwined, and it's a bond that only tightens as you search to uncover a new pathway together.

As the game runs out of new environments towards the end, a certain laborious work ethic becomes apparent in the gameplay, and this problem (if it is a problem) is only compounded by the need to continually dimension-hop, deal with those aggravating respawning enemies, and a slightly cynical collection task near the game's conclusion that seriously ruptures the game flow just as it is reaching a climax.

However, the player's acquisition of new abilities is excellently planned out for the most part, and the addictive elegance of exploration is further tweaked and enhanced by the compulsion to use them in scouting out previously inaccessible areas. It's often hard to reason with a game that asks you to put in so much legwork, but Metroid Prime commands a power that few others can wield so effectively on their audience, and the pay-off dawns on the player when, by the end of the game, Samus has become possibly the most dazzlingly agile and empowered character yet seen in a first-person game.

True, nearly everything in Echoes was also in its predecessor, but the merit in maintaining that game's superb balance whilst still making careful additions (Echoes bears the burden of flawlessly updating the screw attack into 3D with great élan), giving nearly every interface a new lick of paint (dig the sleek new menu design) and imbuing the game with its own uniquely foreboding atmosphere (with a moody synth score that's equal parts John Williams, Kraftwerk and Joy Division) cannot be understated. The echoes are resonating loud and clear all right, but their haunting majesty remains. Rating: 8.5 out of 10.

According to ESRB, this game contains: Animated Blood, Violence

As one of Nintendo's most mature franchises, Metroid Prime 2: Echoes pulls few punches when it comes to conveying the unsettling isolation of Samus Aran's world and the viciousness of its alien inhabitants. So while the game is devoid of realistic violence, Parents should be aware that it could be frightening for younger gamers.

Despite the new multiplayer mode being little more than a throwaway addition, Metroid Prime 2 still represents a fulsome and well-rounded package for its single-player campaign alone. The challenge is excellently pitched (which is not to be sniffed at in these days of massively varying audience abilities and attitudes) and fans of the series are well provisioned for with plenty of super-hidden items, and more concept art to unlock (via persistent scanning) than in its predecessor—although it seems generally weaker and less insightful than the design sketches gifted to Prime's more dedicated players.

Deaf and Hard of Hearing gamers may find the lack of lack of subtitles reprehensible for such an expensive, high-profile title, but they're really not needed: Echoes expounds classic videogame storytelling with the narrative artfully hinted towards through log entries, iconic symbols and unique sights rather than a reliance on cheap cinematic shortcuts or spoken dialogue. It is worth pointing out, however, that audio cues are often very useful when trying to track elusive enemies or master their attack patterns, and a not insignificant dimension of the experience is lost without the excellent mood-setting music and those piercing enemy screams.