According to ESRB, this game contains: Mild Fantasy, Violence 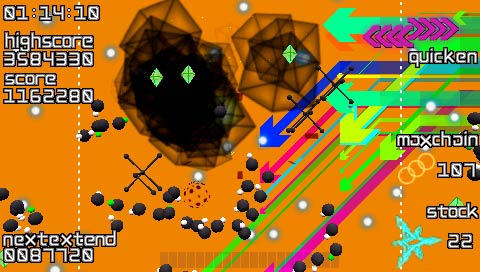 Parents have nothing to concern themselves with here and the ‘Everyone' ESRB rating is trustworthy. A pure videogame from its one-screen movement space to its high-score tables, the only lurid things about Every Extend Extra are its disco lighting and clashing colors.

Shoot-‘em-up aficionados may well be split by EEE: On the one hand it lacks the sadistically tempting brick wall challenge of many famous exponents of the genre and it is fairly easy to see the credits roll. However, the mechanic at its heart is really a wonderful twist on shooter norms and, like the multiple lock-on system of Mizuguchi's Rez, it's embellished with enough style and perfectionist potential to make high score and just-for-fun runs persistently inviting.

Fans of Tetsuya Mizuguchi's distinctive ‘light and sound' gaming experiments will find EEE just as satisfyingly hypnotic as Lumines or Rez once they have reached a certain level of mastery, but the short levels and lack of varied content must be noted as cautions to those who prize value-for-money as much as the core experience.

Deaf and Hard of Hearing gamers will sadly miss out on the game's invigoratingly interactive audio elements, and though it still satisfies on a basic gameplay level regardless, Mizuguchi's remix was clearly intended to be (like all his games) as much a full sensory experience as possible, so diminished audio reception undoubtedly diminishes its appeal to some degree.

With regards to the ESRB rating, I'm clueless as to where the Mild Violence and Suggestive Themes are in the game, but I assume they are hidden in one of the background videos along with the Lyrics that Parents are being advised to watch out for. Basically, this is MTV-level material, although it contains nothing as lurid as some of the music promos that station airs on its daytime playlist.

As for fans, if more Lumines is the craving, then Lumines II is the cure. Most will be happy that the mechanics remain untouched, but it does mean that the incentive for buying the sequel is ‘limited' to continuing the chase for high scores against new skins and to delving into the revised bonus modes, where thoughtfully extended structures make them more lasting foils to the main game than before. Overall, it is a comprehensive puzzle package, so fans and newcomers alike will find plenty to get their teeth into.

I feel I should note that the game is as visually busy and intense as they come on PSP, and gamers with visual sensitivity or epilepsy are advised caution when playing, as focusing on the screen for too long can be disorientating even for regular players. It is also worth bearing in mind that, given the rules of the game, any visual disability that affects color- or pattern-recognition skills may cause difficulty or confusion during play.

Deaf and Hard of Hearing gamers will miss out on the lavish audio feedback, and while none of it is actually necessary to play the game, it is where Lumines derives much of its unique appeal. Puzzle and Mission play modes owe much less to that audio experience, however, and Lumines II remains a well-crafted puzzle game regardless. 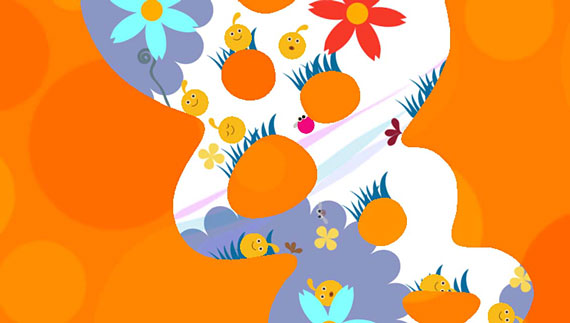 Wisely disregarding the recent claims that the game carried racist sentiment through its depiction of the black LocoRoco, Parents needn't be concerned about anything here. Violence is limited to 'bumping' enemies by jumping into them and having them pop into thin air and the rest of the game is similarly suitable for all.

Fans of offbeat or uniquely cute Japanese titles will be in seventh heaven playing LocoRoco, as will most platform game fans who will doubtless find the ebullient presentation a perfect match for the carefree simplicity of the game mechanics and the occasional frustrations they can throw up. However, anyone wary of knowingly cute cutesiness might want to check out a video of the game in action before signing themselves up to the LocoRoco love-in.

Deaf and Hard of Hearing gamers will miss out on no crucial game information as there is no dialogue or game-critical audio, although much of the game's charm lies in its wonderful music and sound effects and it will be a slightly poorer, though still enjoyable, game without them.

If Parents really want to protect their children, then I suggest they think twice about letting them play this game. There's nothing morally offensive in terms of content, but the idea that there are kids who will get hooked on something so inherently drab and aimless is really rather disheartening. If nothing else, 7 Trials does at least cater to its audience with a vast array of new cards and virtually infinite, self-recycling gameplay.

Fans of Yu-Gi-Oh! will doubtless enter some kind of drug-addled reverie for months on end after buying their first starter deck. The merits of such an effect are up to both the addicts and the creators to work out with their own consciences.

Deaf and Hard of Hearing gamers will have no trouble appreciating the game, since absolutely no crucial information is conveyed via sound.