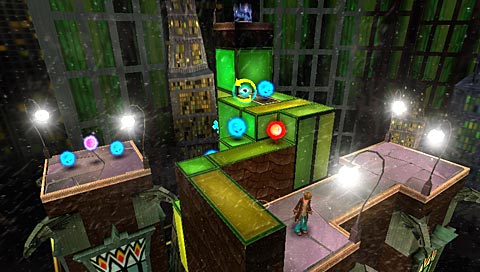 Illusions and tricks of the eye have been staples of cinematic entertainment ever since those unwitting Lumière fans thought the train was coming right for them. And of late, gaming too seems to have developed a taste for undercutting its own visual conventions and toying with players' expectations. Super Paper Mario, Haze, Portal and Okami have all dabbled with innovative ways of twisting the player's perception of the game world, producing unusual visual treats, cause-and-effect complexities and pioneering puzzle mechanics in the process.

Now add to that list Crush. Essentially an arena-based puzzle game about reaching the goal while collecting pick-ups, each of the game's stages multiplies in depth and puzzling possibilities with Zoë Mode's killer key hook. By ‘crushing' the game world from any 90 degree angle around the hero Danny, the player is able to turn the game into a 2D platformer and navigate areas that were broken and impossible to cross in 3D. Uncrushing the universe then allows for full 3D movement again, allowing the nooks and crannies that were hidden in the flattened world to be uncovered. 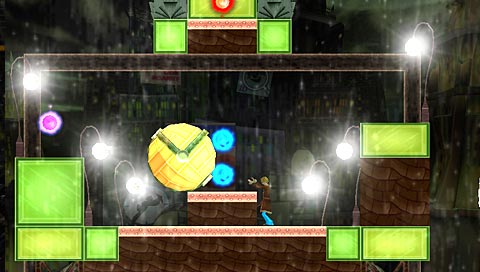 The intricacies of the system are a compulsive joy to discover, and it is a wonderfully satisfying central mechanic. It's even valiantly tied in with a narrative about Danny searching his memories for the repressed root of a maddening insomnia problem. Okay, so it is a loose enough connection to know that the ‘crush' hook came first, but for a handheld puzzle game the story elements are pleasingly well developed. The occasional comic book cut-scenes earn their keep as both rewards and play incentives, and every new mechanic, obstacle or enemy is given a reason for existing within the narrative frame. The generic pick-ups, for instance, are "Marbles" (think about it).

Special mention must also go to the superb audio design, which really nails the sense of psychological unease that forms the narrative backdrop of the four worlds. Though repetitive, the background music and effects hardly put a foot wrong in evoking Danny's haunting neuroses: whether that's in the peculiar menace of mixing "What Shall We Do With The Drunken Sailor" into the Seaside levels' soundtrack, or the eerily disconcerting noise of stepping on the Funfair levels' creaky steel scaffolding.

The level layouts themselves quickly become intimidating to view in the pre-stage flyovers. It can seem as if the core trans-dimensional puzzling is only engaged with once a devaluing period of trial-and-error has been gone through to break down the bewildering possibilities. And as this trial-and-error inevitability sets in, it feels unlikely that Crush will reach the intuitive puzzling heights one would have hoped. But with the satisfaction of completing a level refusing to wane, it becomes apparent that Crush is actually, indisputably, a platform game at heart. 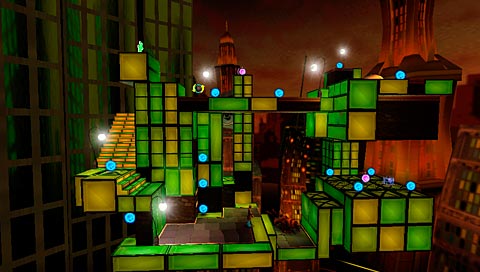 Not only do the platform challenges increase notably in difficulty and precision (frustratingly so at times; I wish Danny was more sure-footed), but like all platform games, Crush and its core mechanic ultimately revolve around using your terrain to get from A to B. It's just that Crush's idiosyncratic rule set can make that simple task exasperatingly puzzling, to both its detriment and its credit.

If the crushing concept sounds simple yet loaded with potential, as most great puzzle mechanics are, then it's disappointing to see Zoë Mode overload their game so quickly with so many switches, enemies, special block types, power-ups, power-downs, rolling boulders, time limit segments, and more besides. Their inclusion reeks of either developer insecurity (over their one-trick design) or publisher pressure (to add bells and whistles).

To be fair, Crush does remain compelling through stages 1 to 40, and it'd be churlish to deny the designers some toys to play with for variety's sake. But the game is certainly at its strongest when you're not wrestling with the annoyances of familiar, small-time gimmicks and the titular, game-worthy gimmick is allowed to flourish on its own merit.

And the final word must go to that pesky puzzle hook that just won't let your stubborn brain accept defeat. By the time Danny's clambering around the creepily off-kilter Seaside world, Crush's perception trick is fully integrated in the player's mind. You begin to see problem areas from different perspectives even before crushing them; making and remaking mental maps of each stage on the fly. And when everything's clicking (sorry, crushing) into place as it should, Crush becomes a satisfying and very pleasurable platform-puzzle workout. [Rating: Originality with polish is rare enough for a deserved 8 out of 10.]

Nice review, thanks. It almost makes me want to haul out my long-languishing PSP! I like that you mention the “superb audio design,” I always like to know when a gaming experience is audio enhanced. Traditionally, for me, this means particularly good BGM, especially the music in RPGs. However, the way you noted the audio in this game is intriguing and I think adds a little something extra to the review.