As polished and colourful as Phase is, playing Beats on PSP afterwards feels like being sat next to a giant subwoofer in the trendiest, spaciest club in town. This is very much rhythm action seen through a Tetsuya Mizuguchi kaleidoscope.

The gameplay is typically simplistic and has few hidden depths: face button icons representing musical beats float towards three central nodes, and the player must select the correct node with the d-pad and press the correct button as the beats pass by in time to the music. What's refreshing is that Beats doesn't waste any time in dropping beat patterns thick and fast even on Normal difficulty, and even throwing curve balls in the shape of beats that look like they could be going to any one of the nodes. There's nothing wrong with making the player catch up with the game if the premise is this simple, and the very first track had me in the groove and bopping to the beat in my chair. This was a good sign. 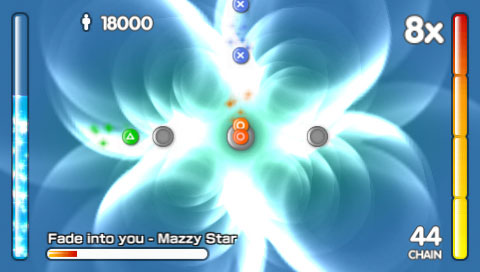 Tight responsiveness; nice presentation (with plenty of themes and Lumines-style level visualizers); swift tutorials; decent pre-packed tunes. All that mattered now was how well it interpreted my own tracks.

Pretty damn well, as it happens. Although it's up to the player to determine which element of the track the beats are emulating, you can generally be sure that some rhythmically prominent aspect of the song is being followed from one moment to the next. In some cases, the accuracy is so uncanny that you could almost believe a track had been specifically authored with a pattern of its own, rather than generated. And although it can never match the impact of actually building the track yourself (as in Frequency and Amplitude), a perfect run will certainly give you a sense that you're playing along to the music in a meaningful way. A shame, then, that the ‘Extreme' difficulty kind of breaks the illusion by throwing so many button commands at you that it's hard to match them to the beat of the song. 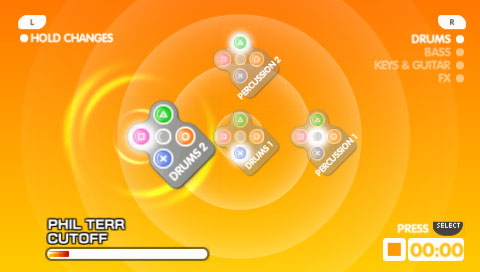 It's also fun to pick a suitable visualizer for the track you're playing. There's something very right about playing along to ‘Cochise' with an intense Furnace backdrop, or ‘Signs' with the bling Urban Mirrors skin. It reminds you how much sensory overload can be a part of the rhythm action experience, especially when it's melding with back-to-basics mechanics.

Easily the best of the three handheld titles, Beats actually feels like a half-playable game even when the music doesn't match the gameplay, such is the visual finesse and well-judged challenge. And when the game is in sync with your favourite tunes, you'll find it hard not to groove along and break into a smile. It also has the advantage of not sucking up your iPod battery, and so works well as a nice break away from passive listening that keeps your brain on its toes as well as your ears happy. [Rating: 7 out of 10]

[Disclaimer: Beats will take up 236 MB on your memory card. The Sony Store (UK) does not display this information prior to your purchase because it is crap, and also amused by the thought of me paying £20 for a bigger memory card so that I can play a £5 game.]