After picking up a favorable critical reception at the International Games Festival, Audiosurf has been the indie flavor of the month on Steam, and rightly so. Ostensibly it is about veering a hovercraft left and right along a race track that undulates to the beat of your chosen song and collecting colored blocks for points, but the grid that those color blocks fall into turns the game into a kind of two-tiered puzzler. Keen racing reactions are needed to collect and correctly position high-scoring blocks of the same color into groups of 3 or more (after which, as you may have guessed, they will disappear).

Immediate impressions are of a game that certainly seems to flow to your music with a convincingly strong sense of rhythm, yet feels disposable and uninspiring in pure gameplay terms. But as you unravel the secondary layer of puzzle play and point scoring, and become more adept at keeping a cool eye on the block grid, you start to appreciate the potential here. 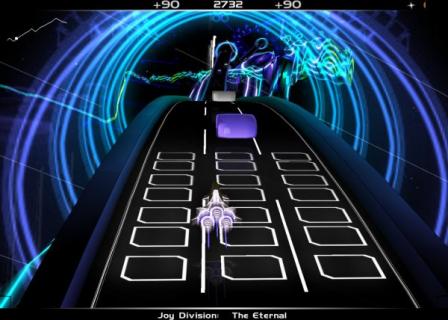 For instance, the unique abilities of the different craft types, although initially a warning that the core gameplay may not be that deep (it isn't; you move a mouse left and right) not only add potential variety to each play, but most constitute a clever enough gameplay variation that you feel they could have been the ‘default' way to play. Unusually, and to its credit, there is no default way to play Audiosurf. Whether you want to play a reaction test game of dodging grey blocks and collecting colors, to have the ability to delete unwanted colors from your grid, or to be able to capture blocks and hold them for later use, Audiosurf's craft types offer a good range of entry levels while still catering for different advanced strategies.

Indeed, Audiosurf has so many factors that seem like they could affect the gameplay, scoring system, difficulty, rankings and track generation, that it can be a game whose balancing takes time to fully understand and to trust, and ultimately to glean satisfaction from. On one count, however, Audiosurf demands compulsion.

Quite simply, Audiosurf rejuvenates the high score table to the point where it feels like a new mechanic. In these days of daunting YouTube videos and dangerously skilled loners, the high score has been largely supplanted as a reward and status symbol by mandatory unlockable content, alternate endings, online verbal abuse, Xbox Achievements, and, if you're very good, $250,000. But Audiosurf has cleverly allowed an inclusive high score community to build around a non-gaming passion that everybody has: music. 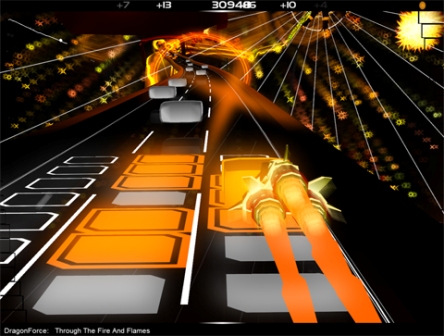 Whereas the scoring systems of the other games in this round-up feel flat and (no pun intended) pointless even when the game itself is fun, Audiosurf has dug its claws into the universal love of music in a way that will have most players audiosurfing through their MP3 collections not only to see how the game plays with different types of music, but to see who else shares their passion for that music and then try to beat them at it. For me, the game truly came alive the first time I received an e-mail telling me my best score had just been bettered on a track I never thought anyone else would try. A throwback to the days before the immediacy of online play, Audiosurf uniquely personalizes its high score wars. You'll stop at nothing to reclaim the throne on your favorite songs.

It even makes steps towards social networking by allowing you to, ironically, become ‘Friends' with your scoreboard rivals and to track each other's song choices. Of all the games in this feature, Audiosurf is the one most reassuringly rich in innovation and potential, and proves beyond question that plastic instruments and pricey downloadable content are not the be-all and end-all of the rhythm action genre. [Rating: 8 out of 10]