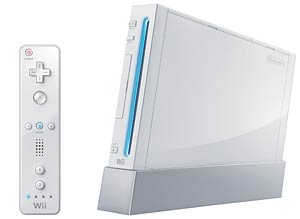 "The Wii is a piece of sh*t," says Hecker

Apologies for choosing such a shamelessly eye-grabbing headline, but bear with me. Yes Chris Hecker's statistic about Nintendo's lack of the phrase "art-form" on their websites is silly, and yes he himself uses the phrase "suck ass" to describe the Wii (just pipped to the crude post by Brad's recent description of the PSP), but there are two perfectly valid points being made underneath the rant rage.

The first is that the Wii is clearly underpowered in some developers' eyes, and not just in its ability to throw millions of hi-def polys around. The GameCube was crippled by its memory capacity, with only the in-house and big budget titles really unlocking its potential (Zelda, Metroid, Resident Evil), and all the Wii adds to that base technology is another chunk of hard to access memory. As a developer, reigning in your ambition because of the hardware you're working with is never fun, and Nintendo have just gifted Wii developers with another few years of such frustration.

The second, more interesting point was Hecker's suggestion that Ninendo's party line of making and styling games as fun playthings rather than aspiring works of art is actually debilitating to the industry, which is forever fighting prejudice and aiming for the credibility and artistic freedoms of other mediums. Of course, many will rightly argue that there is room for both notions of videogames to co-exist and that games like Brain Age and Nintendogs are doing more than any other recent 'mature' title to spread the appeal of gaming and encourage wider cultural acceptance. But if Nintendo becomes the market leader of the next few generations then it has the potential to shape and re-shape the mainstream perception of gaming. What would GameCritics readers think if Nintendo spent the next 10 years effectively reversing the 'PlayStation effect'?

I can’t see why Gamecube was crippled by its memory capacity. I thought PS2 had LESS memory than Gamecube, which made Capcom reduce graphics detail for the PS2 port of RE4. To add to Spiffyness’ definition of the “PlayStation Effect,” with PSOne, Sony broadened the then current demographic to include older males, because they had these hip, mature titles like Tekken, Wipeout, and Gran Turismo. I hope this was what you meant to say in your article. What I would like Nintendo to do is not to reverse this effect, because then it would be like the 16-bit era all… Read more »

Generally, as far as I know, the “Playstation Effect” is used to describe how the Playstation brought videogames to the public eye and made them more mainstream. Up until that point, you were still a “nerd” if you played videogames. Now, everyone plays games, and you’re only a “nerd” if you play a whole lot of them (generally speaking, of course). People give the Playstation far too much credit, though. The PS1 was just the first step: it made videogames mainstream… with male teenagers (even the cool ones). That’s certainly a long way from being recognized as a “legit” art… Read more »

of course there is room for both distraction and apirations toward art – real problems occur when the issue is made into one of polarity, and either side convinces itself that they are inherently incompatible, that video games are “meant” to be one thing and not the other, as if books are only allowed to be either cheap dime store novels OR great literature. what, exactly, is the “playstation effect”? the perception that playstation titles are exclusively heavy-handed and a bore to play and that nintendo titles are purely kid stuff is silly. i personally would prefer more serious games… Read more »

Everyone played video games when I was a kid (born in 81) the cool kids and the nerds. However for the kids older than us and adults video games were seen as nerdy. I think ‘the playstation effect’ is mostly BS and you’ve just seen the first generation of people exposed to games as young children grow up over the last decade.

Chi Kong Lui says: “Also, since when does expression and art hampered by “underpowered” tools? Did cavemen complain that they didn’t have 32-bit colors? A good artist can make beautiful art with a piece of charcoal. Art is about pushing boundaries and it can be done under both limiting and expansive parameters.” Yes, but the availability of CGI graphics has allowed other artistry to be created. To say that having all the tools normally available isn’t to limit the extent of possible artistry is misleading. Ico was brilliant art, to my mind the finest artistic effort gaming has ever seen,… Read more »

Thanks for chiming in on what you think the “Playstation effect” actually is. 🙂 It’s a phrase I just knocked up, trying to differentiate between the effect Sony has had as the market leader and the influence Nintendo might have if they were to assert dominance over the home console (as well as handheld) market. But the question I asked was hypothetical because Hecker’s rhetoric is ultimately just a moan. It was interesting to hear someone criticize Nintendo for not taking the medium ‘seriously’ enough, suggesting that they actually have a responsibility to do so as one of the biggest… Read more »

Hecker says “It’s about interactivity – that is the key differentiator of our art form, and interactivity is about doing something interesting with that input and threading it back to the user. You can’t do that with a piece of sh*t underpowered computer.” As I read the statement above, doesn’t the Wii-mote fulfill his criteria of “doing something interesting?” Heck, no other console has innovated the input more than the Wii at this point. Just because Gates and Harrison talk the talk doesn’t make their respective console’s games more artful and innovative. Even if Nintendo denies their games being art,… Read more »

Sean Riley says: “Limits are as important as freedoms in art. But only as important. For an artist to claim the Wii doesn’t afford him those freedoms is perfectly legitimate.” You know, back in 1763, when scientists discovered that poems could be more than seventeen syllables long, many people suggested that it was the death of the Haiku, but here we are, 244 years later, and literally eight people a year still write Haikus. My point, if I have one, is that someone’s claim that the Wii doesn’t afford him the freedom to create art speaks more to his lack… Read more »