In a small, smart underground bar in London's West End, a jet-lagged, softly spoken but friendly Tetsuya Mizuguchi addressed assorted games, music and lifestyle journos to talk us through Every Extend Extra, his latest venture into hypnotically musical gaming.

The game itself has been out since November in the States but will only hit European shelves this February. Timeliness aside, however, the event remained an interesting test of Mizuguchi's status as one of the medium's leading auteurs and visionaries. 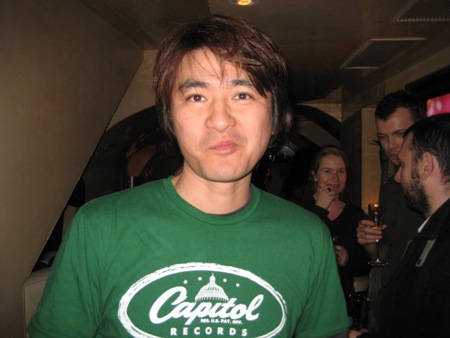 Mizuguchi's entirely competent (he never once used his bored-looking translator) but less-than-advanced grasp of English impaired his ability to give the deep game analysis that you imagine him likely to give in his native tongue. But it'd be cruel to put that apparent lack of insight (also evident in his translated interviews) down to a fuzzy and vague artistic notion, and Every Extend Extra itself easily refutes that claim.

A PSP revision of a one-level shareware shooter, EEE is proof that Mizuguchi's (still) unique brand of audio-visual stylisation can be applied to an existing gameplay model in such a way that both transforms and transcends it. His typically playful, but never disposable, symbiosis of gaming's core ingredients remains the hypnotic wonder it was when he first showed us Rez over five years ago. If anything, his signature style is now more identifiable than ever. Melding the aesthetic style of rave culture with traditional game genres and simple, essentially one-button control systems, few developers set about rebuilding game models with such an elemental view of what they are made of in the first place: light, sound, color, rules, play.

Thankfully, the man's ‘visionary' status is rooted firmly in the first-hand experience of his output by fans, perhaps unlike other creative mediums in which personalities and eccentrics often hold as much sway as their work. The realisation that even games as strongly signatured as Mizuguchi's are created by large teams over long periods of time is an important step in breaking down the myth of the author in a medium to which that concept very rarely applies the way it does in others. The fact of the matter is that anyone who played Rez is just about as qualified as Mizuguchi in trying to unravel its heady mix of symbolism and synaesthesia, to interpret its indescribability in their own way.

Back in the room, and Mizuguchi modestly emphasized the simplicity of EEE (unlike Rez, which he described, somewhat puzzlingly, as having "depth") and also the basic fun factor that is for him the necessary backbone of all games. He then played through a simple level to show us the "moving sounds", interactive tempo and real-time beat layering. The demo was a bit of a mess, to be honest, due largely to the quick and intense gameplay of the title, which, like all Mizuguchi's games, really needs to be experienced first-hand to be understood. But at least it was a gloriously musical mess, and watching one of the foremost names in modern games development get sucked into ‘the zone' on his own game, in front of a live audience, was a great spectacle in itself; proof that games are a great equalizer, reducing us all to that same outwardly vegetative, inwardly razor-sharp mode of intense concentration and competition.

Not that Mizuguchi had a corporate or pompous image at all. He spoke humbly and freely about his "doing nothing" role of executive producer and had no problem citing his team as the ones who discovered and showed him the original shareware version of Every Extend.

He is also a very likeable ambassador for coolly avant-garde, rave-inflected gaming (even at 41, which is itself hard to believe), and clearly connects with those who share his enthusiasm for musical gaming euphoria. At one point, a distinctly non-gamer audience member cited EEE as evoking "that 6AM feeling" after coming out of a club: head buzzing, eyes glazed, still hearing music. Despite the guy's hard and heavy London accent and slurred slang, Mizuguchi gave a knowing nod of recognition and agreement.

Having then played the game on the train back home, my head still tingling and ears still ringing from the event's champagne buzz and obligatory DJ, I would also have to agree. It's a brain-hugging, unexpectedly carefree shooter that you can play largely at your own pace (speed boost power-ups offering a unique, in-game difficulty select) and offers a surprisingly accessible introduction to Mizuguchi's inimitably hip and modern take on classic game genres that are too often taken for granted. Visionary or not, he's clearly doing something right.