Last year, I called Sony's fitness title EyeToy: Kinetic a quiet revolution in game design, and this martial arts based sequel certainly serves as a further curiosity tweak to the faintly odd notion of sports games—that is, real sports games—flourishing in future console generations. On this evidence, that revolution will boil down to design specifics as much as it will persuasive concepts.

Bravely, EyeToy: Kinetic Combat veers off from the ‘all-round' fitness theme of Kinetic and attempts to teach players the basics of Hung Gar Kung Fu. Contrary to what other lazy reviewers (and I suppose I mean that literally) have said, the fitness aspect is really now a fringe benefit rather than the focus. Sony's London Studio should be applauded for testing themselves with such a peculiar and unprecedented goal as teaching a specific martial art, but sadly Kinetic Combat is not the inspirational software it could have been.

The core teaching is done through tutorials in which the player must copy the onscreen trainer's movements, performed on one side of the screen as a game graphic and on the other as a semi-transparent shadow over the player's own EyeToy image. The idea is that one matches up movements to the trainer's ghostly outline, which is shaped according to the height and body build descriptions players input at the start of the game. It sounds simple enough, but sadly the game's main flaws can be extrapolated from that one key screen. 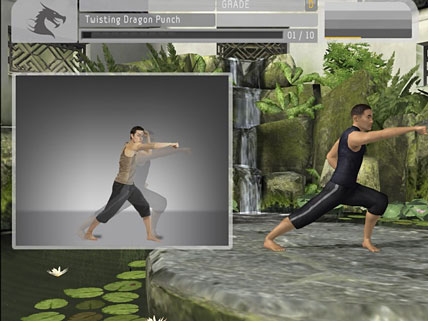 First of all, the screen is horribly cluttered. The time and effort the gamer spends paying attention to the instructor's movements and comments, trying to fit inside and in time with the shadow, and checking the five different performance feedbacks (red/green motion evaluating blocks; red/green/amber rep. blocks; current grade letter; current performance evaluation; pointless line graph) leaves him or her even less chance to concentrate on the power and technique that is supposedly at the core of this martial art. The new instructor doesn't rescue the presentation either, being painfully dull in both appearance and (largely unhelpful) dialogue, which affects the game more than you'd think.

The restricting decision to judge players on their ability to match the onscreen trainer's movements in real time (like a kind of unfair, rhythm-action ‘Simon Says…') seems to misjudge the Kinetic audience. Whereas the more flexible and forgiving first game praised players for their achievements, here they are immediately told that they're falling short of a perfect standard. Yet that evaluation is itself undermined since the onscreen shadow against which the player is tested is almost useless to anyone with less than four or five metres between themselves and the TV. It doesn't help that the standard Hung Gar stance is particularly low, and dipping to try and fit the trainer's shadow is uncomfortable and potentially unsafe.

Many will quickly tire of being told that their movements are inaccurate just because of their spatial imposition and the software's inability to compensate. I have a perfectly reasonable room size, yet Combat remained inflexible in allowing me to fit my onscreen tutor's shadow. Besides, even though the motion sensing technology is sound in concept (disregarding its execution), it quickly becomes dull performing the endless reps that Combat asks without any sense of freedom or fun. Perhaps that's a personal opinion about the appeal of martial arts training, but at the end of the day Combat has in no way endeared it to me. Being tutored on technique by an impossibly wooden game character is simply more tedious and less game-like than the high energy exercise of Kinetic. 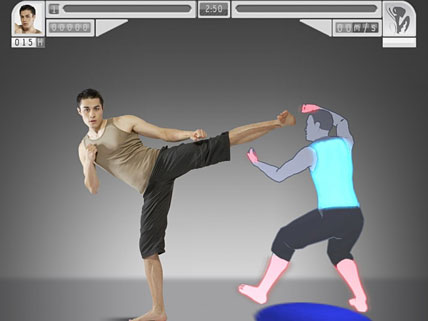 Outside of direct tutorship, however, there are training games and sparring fights, which recall the last title's exhausting freeform workouts and are all the more entertaining for it. Their effectiveness varies and the games will ask players to perform moves that they haven't even learnt yet, but they still feel beneficial for only suggesting moves, and most of all just for being enjoyable.

It is crucial that Kinetic games make me want to rearrange my furniture and work up a sweat, but whereas the original was at pains to present a workout experience as fun, comfortable and considerate as possible, Combat can make me feel like I'm hooked up to performance-testing lab machines.

Kinetic, in a flawed and even haphazard kind of way, taught us that with the right kind of guidance and encouragement, a pupil can be helped to learn at their own rate and successfully so. Kinetic Combat teaches us that dry didacticism and overwhelming, in-your-face feedback merely stifle the process. If games are going to start educating us (as the recent Brain Training, TalkMan and Kinetic games suggest they would like to), then they're going to have to be more fun, personable and accessible than other methods of learning, not less so.

As for Hung Gar Kung Fu: try taking some evening classes, and quit those instead. [Rating: 5.0 out of 10]

Disclaimer: This title is currently only available in EU territories with no US release currently slated.