Not Playing In The Major Leagues 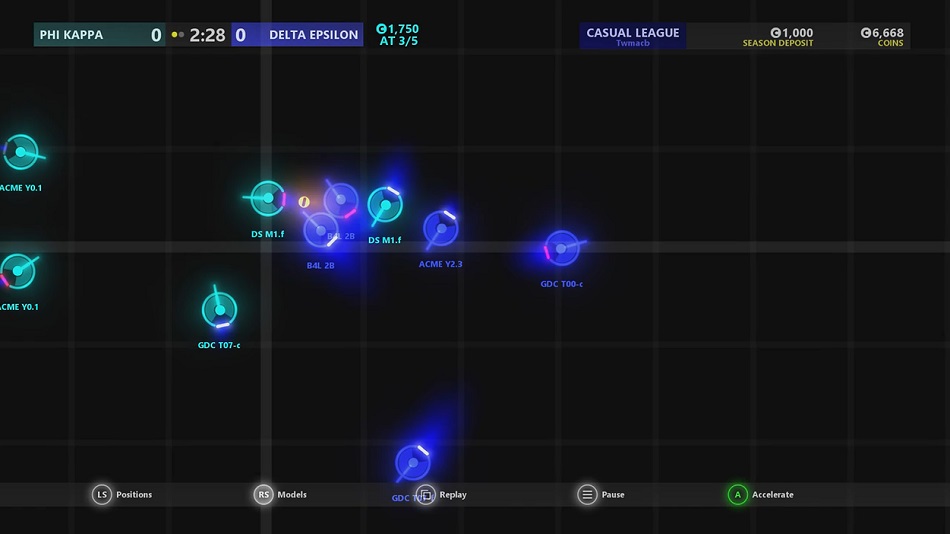 LOW It needs a lot of work.

The Creators Program is a great feature on Xbox One —  by participating in it, small developers with small budgets don’t have to jump through stringent publishing requirements, and it gives them a platform to get their game out there. However, as the spiritual sequel to the Xbox 360’s XNA program, it suffers from some of the same problems. Primarily, it isn’t very visible to most users, and sifting through bad titles to find the good ones is a chore due to poor filtering. Gems can be found, though, and in its current state, Thetaball is one of the promising ones.

Thetaball is a top-down sports game that’s a bit like a combination of soccer and rugby. The player takes on the role of a neon circle (one of five) with a line at the front to catch a ball and a ‘bumper’ on the back that, when hit, disables all control for a few seconds. The objective is to try and score by putting the ball in the opposition’s goal.

While it may appear simple at first, there are lots of little rules to learn. For example, a single player can’t hold onto the ball for longer than 5 seconds. Also, charging into other players’ bumpers to disable them is good, but bashing into the side of the pitch is bad. There are other rules, and they seem to make sense with the goal of keeping a match game tight and the player focused on committing to accurate action. 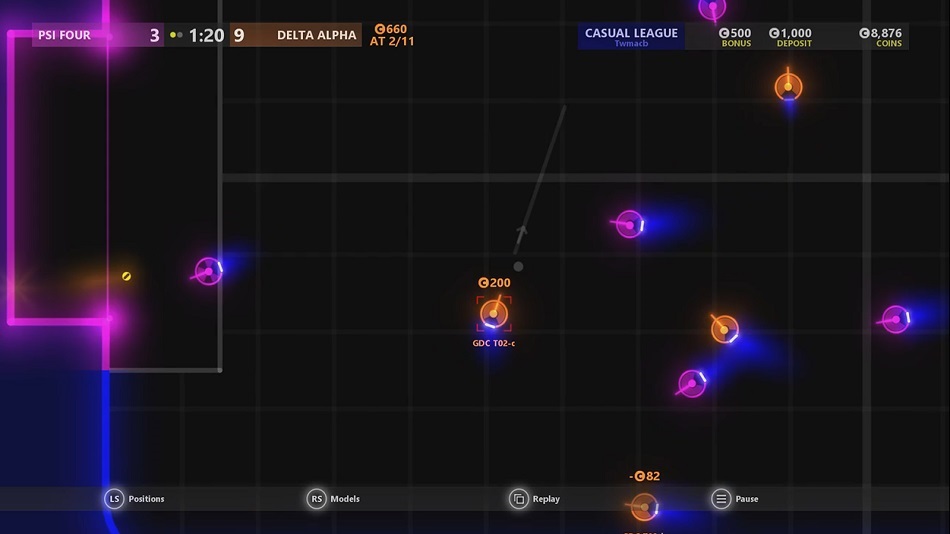 Unfortunately, the AI of the teammates never feels smart enough for the rules to ever make sense. Almost every AI hotly pursues the ball, and it all ends up feeling like soccer in the playground at primary school —  everyone frantically rushing at the ball, and the goalkeepers sitting glumly alone.

A way to fix this would be to add human players to allow for more complex tactics, but the problem with that is the user interface is a bit of a mess. I tried to get two friends to join in, but if they signed into their profile then they were in control of the game and forced to go through tutorials when we just wanted to get a match in. It was a frustrating experience, and I hope the devs fix this.

Despite the issues I’ve outlined, there’s still a good game in here. When I got over the controls (and the fact that I could accidentally swap right hand/left hand dominance at the press of a button) I dug into the season, gradually evolving the skill of my team’s characters was well done, and improving my standing was addictive. I’d even say that winning a match of Thetaball is as gratifying as its peers like Rocket League or #IDARB.

Perseverance will reward with Thetaball. It’s got a bigger hump to get over than most other games of its kind, but its base is solid — the dev just needs to zero in on the best parts of the game and start iterating. Rating: 5.5 out of 10

Disclosures: This game is developed by Tim Sheehan and published by Tim Sheehan. It is currently no longer available on Xbox One  — it was removed after this review was written. However, it is reported the game will be available on Steam in June, 2018. This copy of the game was obtained via publisher and reviewed on the Xbox One. Approximately 7 hours of play were devoted to the single-player mode, and the game was not completed. 1 hour of play were spent in multiplayer modes OR There are no multiplayer modes.

Parents: According to the ESRB, this game is not rated (the PEGI rating is 12). The game is very simplistic with no violent imagery, the players are merely reduced to simple orbs.

Deaf & Hard of Hearing Gamers: All warnings are clearly indicated visually, and no audio is needed for successful gameplay. It’s fully accessible.

Remappable Controls: Certain functions are remappable. The game is left and right hand friendly, and that can be changed on the fly.

Colorblind Modes: There are no colorblind modes available in the options. Personally, I struggled to differentiate between certain teams — orange and yellow were similar in neon glow, and others also blend into each other. I suspect this one might be a serious problem, visually.

He can be found on twitter, where he welcomes screenshots of Dreamcast games and talk about Mindjack, just don’t mention that one time he was in Canada.
Latest posts by AJ Small (see all)
Tags: AJ Small Creator's Program indie review Sports Thetaball Tim Sheehan Xbox One
Subscribe
4 Comments
Newest
Oldest
Inline Feedbacks
View all comments

This review is very unfair! The artificial intelligence is great especially when you get into the higher leagues…. you can see them doing all kinds of strategies and mixing things up, it’s really subtle with complicated strategy. Multiplayer worked fine for me, just select local multiplayer and go, had 3 people playing and it’s FUN.

Hey, so I kept on playing and I didnt see any of this behaviour you are talking about. Willing to be wrong and say that things have improved since I played it. Also, were you playing this on PC or Xbox One – because the logic for setting up multiplayer was straight up broken – that is not to say that we couldn’t play but the game refused to let me be the active player on Xbox and it meant that we could not continue with my progress. By no means do I think Thetaball is bad – as I… Read more »

Yes, the multiplayer also worked well for me also. The review can be better, as you get to the higher leagues the artificial intelligence and the gameplay is much better and cool. If you are having a problem with multiplayer you can go for customer service from this site (link removed – Ed.) One of my also had a problem like this he got his fix from here, you can try it out once.

Thanks, like I said it does improve as you get further in, but it doesn’t have the instant appeal of its peers.

Not sure that they will be able to fix the issue without patching it on Xbox One.