Something To Fawn Over 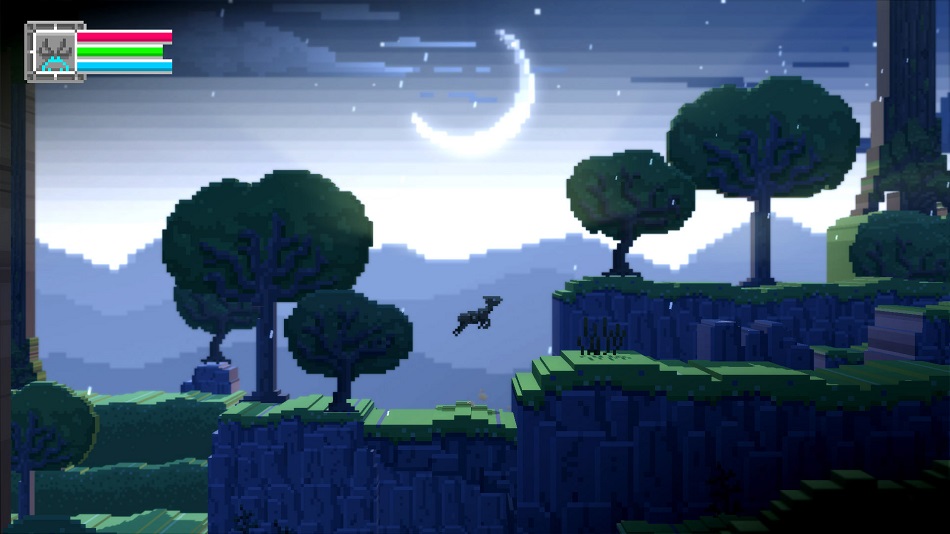 HIGH The bit with the Penguins.

There is a category of games that I reserve for long, lazy Sundays. They’re the kind of days where I’ve got a bit of hangover and no inclination to do anything except veg out in front of my TV, and at those times I want to play a soothing balm of visuals and low-threat challenge. A few years back The Deer God came out as part of the Xbox Live Gold games, and it was exactly that kind of game. Now it’s come to the PS Vita.

The Deer God is a procedurally-generated journey through lush, parallax-scrolling forests, deserts, and icescapes. At the beginning, the player is a hunter that shoots a deer. He’s then subsequently killed by wolves and reincarnated as a deer. The quest that follows is to do the bidding of the Deer God in the hopes of atoning and eventually being returned to human form.

The aim of the game then becomes to run along 2D space, jumping over enemies (or attacking them with a limited charge) and tracking down tasks such as helping a preacher find new parishioners, or delivering a wife’s message to her dead spouse.

The game is utterly gorgeous —  scrolling plains are lit with retro sun rays, and giant redwoods give way to pixelated canyons that trains ease through. Penguins slip and slide in the moonlit, blocky tundra and polar ice caps. Baboons throw coconuts from their perches in the darkened jungles, swathed in 16-bit mists.

The Deer God is never challenging, although there is some threat to the deer’s life in the form of hunger and aggressive animals, dying serves no real penalty except for a loading screen and a minor loss of progress. The missions themselves are fairly pedestrian, but in a good way — they don’t interrupt the joy of running through the world and catching random vignettes that randomly appear during the deer’s travails. And that music! Evan Gipson’s soundtrack is a dreamy tribute to ’90s ambient electronica. I’ve found myself humming it while idling for the metro. 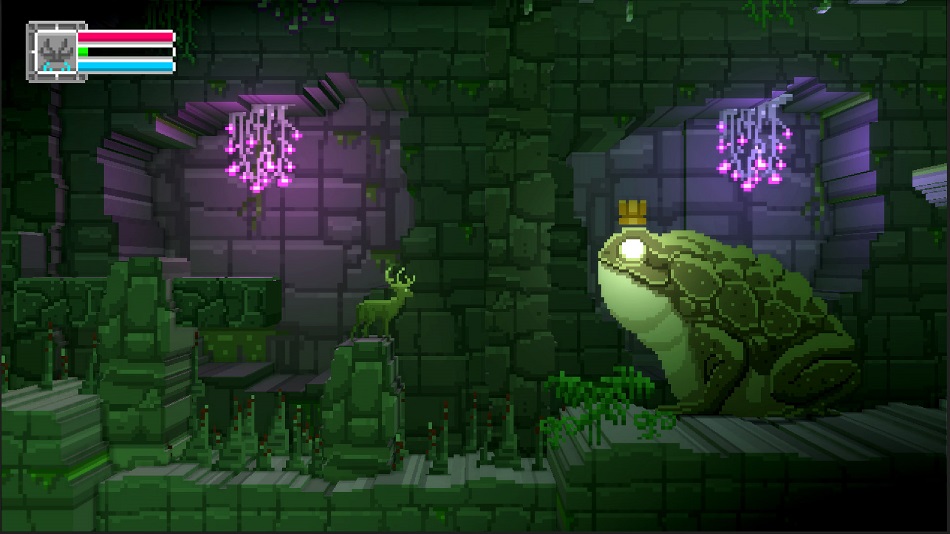 The Deer God is among a rare handful of titles on consoles that aren’t easy to categorize, which makes it a refreshing change — it’s a mesmeric, meditative experience where even the fights are relaxing… Except not so much on the PS Vita.

I had never imagined that the game would be taxing to any platform, but The Deer God struggles on Sony’s handheld. The transitions between each biome hitch and lurch, and it’s especially bad given that the visual feedback for taking damage is indicated by the screen shaking — that cue is indistinguishable from the stuttering. The optimization is also poorly implemented for large numbers of antagonists. In such cases, things unpredictably slow down and speed up when there are too many things onscreen, making jumping and attacking a bit of a crapshoot when they’re needed most.

Further, the screen is just too small for some elements to be seen properly. Is that a tuft of edible grass that will replenish my health? No, it’s a porcupine that’s just taken a chunk of my health. These things were readable on my TV when I played it on Xbox One, but when reduced to a few pixels, such things are hard to discern at a glance.

It’s also important to note that people with colorblindness will fare even worse. I have trouble with spectrums, so placing a tiny green snake against a brown or dark green background renders it almost entirely invisible until it moves. Things like this aren’t deal breaking, but they do lead to unnecessary deaths that jar the laid-back mood of the game.

While The Deer God is a title that I think everyone should play, the PS Vita version stumbles at a couple of points — not enough so that handheld owners will feel shortchanged, but they should know it isn’t the optimal way to experience this work. Rating: 7 out of 10

Disclosures: This game is developed by Blowfish Studios and published by Crescent Moon Studios. It is currently available on Xbox One, PS4, PC, Mac, Wii U, Android and iOS. This copy of the game was obtained via publisher and reviewed on the PS Vita. Approximately 4 hours of play were devoted to the single-player mode, and the game was completed 2 times. There are no multiplayer modes.

Parents: According to the ESRB, this game is rated Teen and contains Violence, Blood, Use of Tobacco. Some themes might be considered a little disturbing, with baby animals frequently falling to their death, but otherwise everything is fairly abstract and would be suitable to pre-teens as long as they understand the concept of death.

Colorblind Modes: There are no colorblind modes available in the options. As a colorblind person this became very problematic on the small PS Vita screen.

He can be found on twitter, where he welcomes screenshots of Dreamcast games and talk about Mindjack, just don’t mention that one time he was in Canada.
Latest posts by AJ Small (see all)
Tags: AJ Small Blowfish Sutdios Crescent Moon Studios review The Deer God Vita
Subscribe
2 Comments
Newest
Oldest
Inline Feedbacks
View all comments

Glad you got more enjoyment out of this game than I did. I absolutely hated it. At least the Vita version isn’t as glitchy as its PC debut was, though yeah, I can imagine the smaller screen makes it much more difficult to tell what everything is.

Hey Jim
Sorry to hear you didn’t like it. I imagine if it was buggy and glitchy then that is going to dampen the enjoyment. With The Deer God, I found the game to be more in line with Proteus or Unfinished Swan than, say Super Meat Boy.

The console release is the way to go with this game, but the Vita version is a solid attempt.