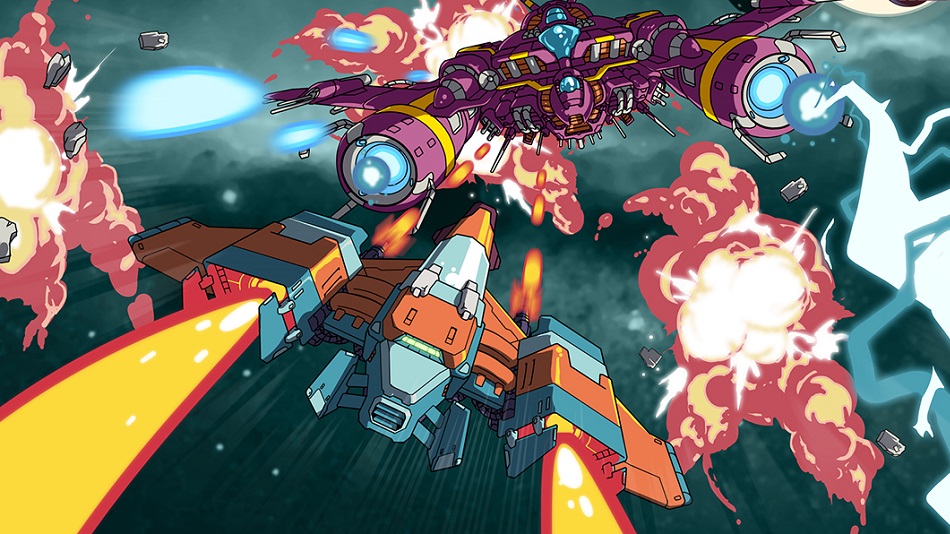 HIGH Where to start?

LOW The background animations can be confusing.

Western developers don’t ‘get’ how to make bullet-hell shooters. They require an understanding of patterns and a beauty in enemy waves that even a low-rent SNK release can grasp — it’s not just about putting a lot of things on screen without rhyme or reason. However, Vancouver-based Spacewave Software has delivered Rival Megagun, a title that avoids the Western bullet-hell conundrums thanks to their entry in a rare subgenre, the Versus Bullet-Hell shooter. I think they nailed it

Megagun is presented in a top-down splitscreen mode with specific waves appearing on both sides. The aim is not just to survive the waves, but to attempt to sabotage the opposition on the other side of the splitscreen. The basic premise is that an intergalactic competition is happening where two spaceships face off against each other and try to survive waves of enemies. Whoever gets hit twice, loses. 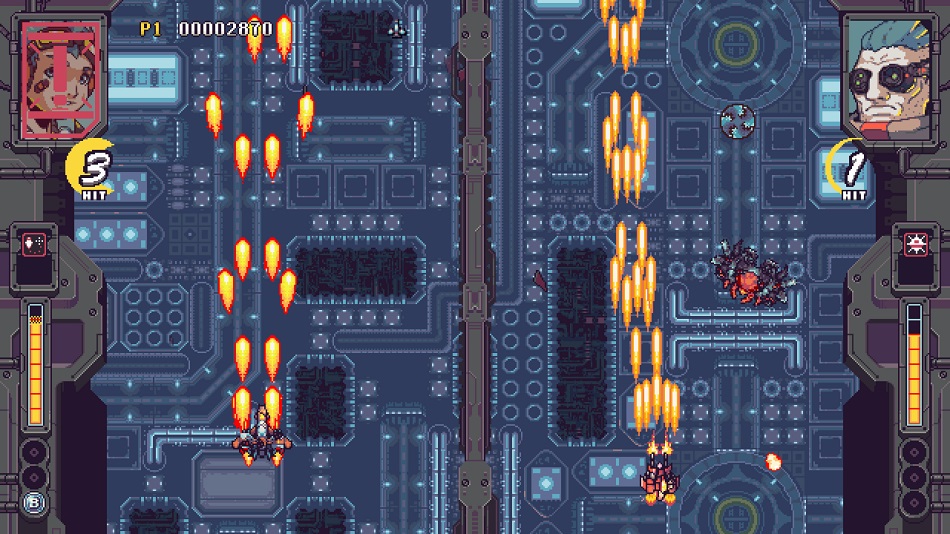 Each of the six selectable characters has their own strengths and weaknesses — some have wider shot spread, others have focused damage beams, and so on. As each ship racks up kills, it sends enemy spawns to the other player and builds up a meter that can be burnt to hurl instant traps, or maxed out to turn into a ‘boss’ ship that attacks the opposition with devastating bullet patterns.

Rival Megagun works because the traditional bullet-hell elements are muted; the game doesn’t throw thousands of bullets at the player in the manner of a Cave title. That doesn’t make the game any less frantic, because what’s really required is that the player looks for good opportunities to mess the AI/human opponent up while dealing with the waves on their part of the screen. This dance is integral to winning, and the the back-and-forth feels great — the UI intentionally demands that players keep their eye on several things at once, leading to skilled, high-level play.

The script features witty, goofy throwbacks to the kind of dialogue players would commonly see in the ’90s, and the replay value comes from scorechasing and knowing that the true ending for each character can only be unlocked by not using continues — it adds an incentive to improve knowledge of the bullet patterns, each character’s expertise, and improving the ebb and flow of meter usage. 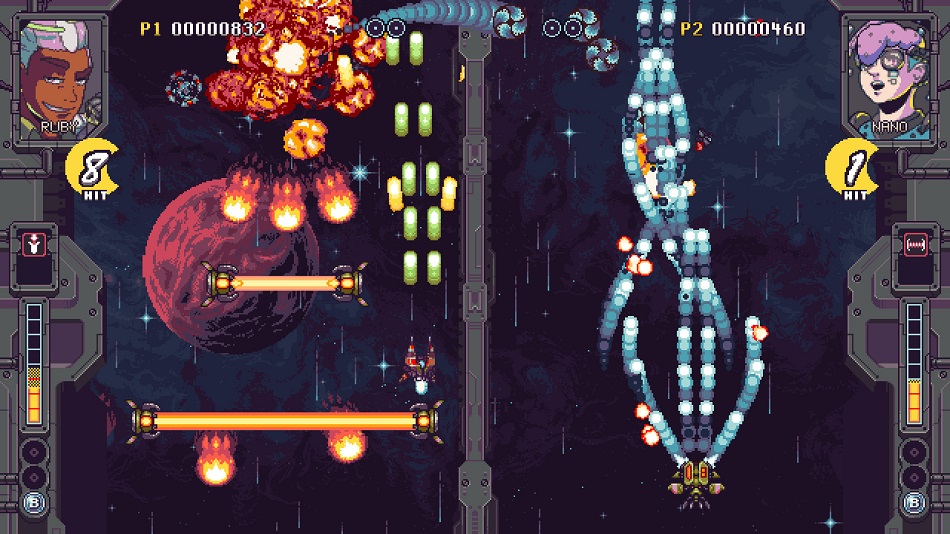 While playing solo is great, facing off against living, breathing opponents is what will keep Rival Megagun going. As such, it’s good to see that the online netcode is stable, even across great distances.Unfortunately, I was only able to play with friends, as the community seems quite small on Xbox Live. However,I hope to see a healthy crowd of Senko No Ronde and Twinkle Star Sprites fans jump on onboard for this and keep it alive.

Rival Megagun is a tight, accessible, and well-executed game that offers plenty of incentive to return, improve and master its play. This is a gem of a title, and one not be missed by fans of bullet-hell games, or shmups in general. Rating: 9 out of 10

Disclosures: This game is developed by Spacewave Software and published by DEGICA Co., Ltd. It is currently available on PS4, PC, XBO, and Switch. This copy of the game was obtained via publisher code and reviewed on the XBO-X. Approximately 4 hours of play were devoted to the single-player mode, and the game was completed. 2 hours of play were spent in multiplayer modes.

Parents: According to the ESRB, this game is rated E10+ and contains Mild Fantasy Violence. All the action is abstracted or against non-human, unidentifiable enemies, there is nothing in here that is disturbing.

Deaf & Hard of Hearing Gamers: All of the story is delivered via text, the UI clearly indicates threats, and the game is fully playable without sound. The text size cannot be altered. It’s fully accessible. 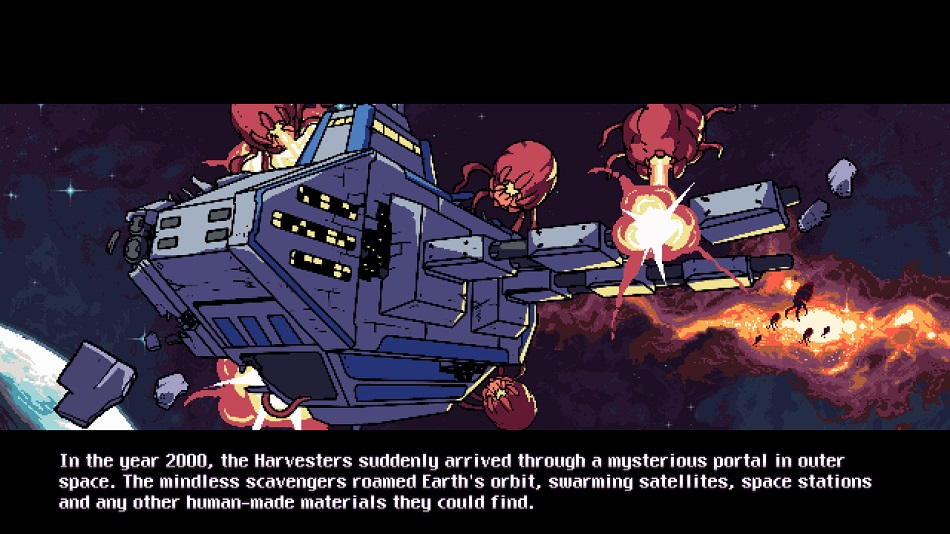 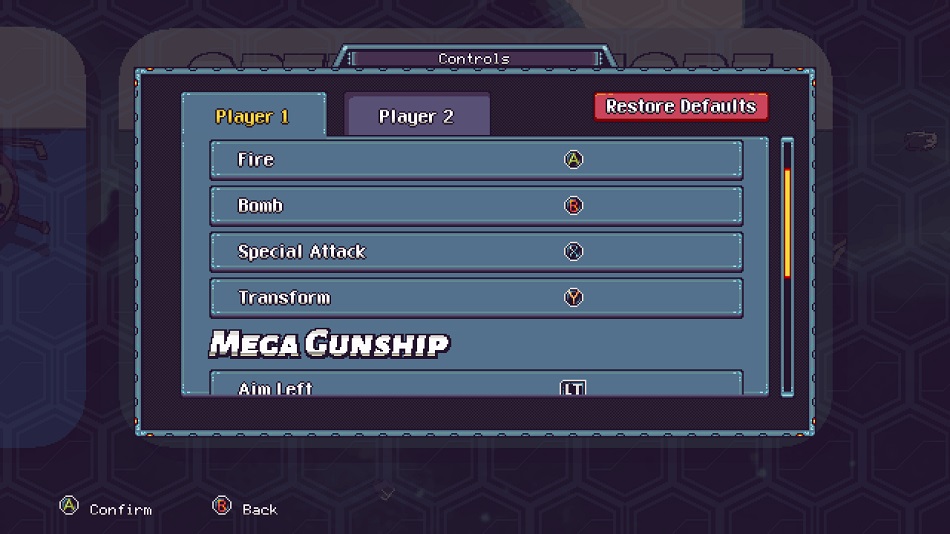 He can be found on twitter, where he welcomes screenshots of Dreamcast games and talk about Mindjack, just don’t mention that one time he was in Canada.
Latest posts by AJ Small (see all)
Subscribe
1 Comment
Newest
Oldest
Inline Feedbacks
View all comments

Fantastic review. Rival Megagun sounds like a very enjoyable game. The script sounds great. And the gameplay seems highly entertaining. And it is cool to be a 9 year old again!