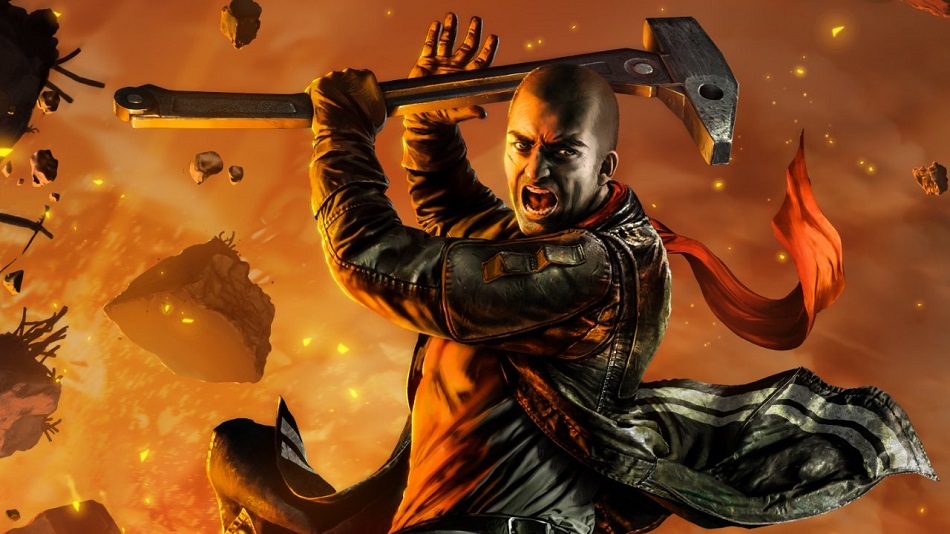 When Red Faction Guerrilla‘s demo came out on the Xbox 360 in 2009, I had reached peak indifference with sandbox games. I played around with the guns and hammer it offered, and was largely unconvinced. I got in a vehicle and drove around for a bit, bemoaning the cramped roads the whole while, then I dodged a car and accidentally drove into a building — except I didn’t drive into it, I drove through it and shattered glass, dismantled segments of wall and left the building missing most of its lode-bearing pillars.

I pre-ordered the game immediately.

The original developers, Volition, had found a way to do something interesting with the genre by tying the destructible environments into missions advancing the theme of destabilizing a cruel regime on Mars. Everything I destroyed was helpful for the resistance. 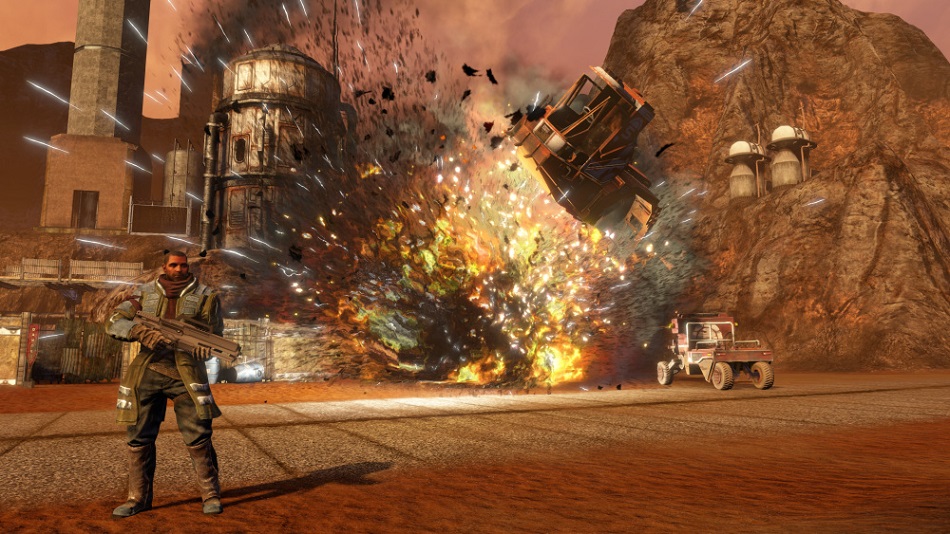 After a sequel that didn’t meet the same level of success, Volition struck gold with Saint’s Row and that was the end of Red Faction until THQ Nordic bought the rights and started slowly reissuing the best of the back catalog. Before jumping back in after so many years I was a little worried that my memories wouldn’t hold up, but I’m happy to say the experience is mostly intact.

Guerrilla is a third person, open-world game set on Mars. The player controls Alec Mason, a miner whose brother is killed by the Earth Defense Force that controls the planet and siphons its resources to prop up Earth’s economy. Mason has to destroy the EDF with an array of weapons including his trusty upgradeable hammer, remotely-detonated charges, and the late-game weapons like Nanotech guns.

The campaign is divided into discrete areas, and EDF influence must be removed to unlock each subsequent area. This is done by taking on side missions or destroying specific buildings so that the influence lowers enough for the required story missions. The missions themselves are an assortment of demos for the game’s Geo-Mod2 engine – it’s the thing that makes every building destructible with a fantastic level of granularity — whether firing rockets at EDF blockades or throwing gas canisters with detonation devices down tunnels, the accompanying physics of toppling a giant smokestack or the side of a barracks never stops satisfying.

The permanent impact of crumbling edifices isn’t the only thing that Red Faction: Guerilla gets right — many sandbox games fail to offer flexibility in completing their tasks, but Volition nailed it. As the areas grow heavier with EDF dominance, some of the building targets are heavily guarded and feel impregnable. However, because of the mix-and-match nature of the weapons and the fact that I could steal a giant mech and stomp over everything made it all feel more freeform, and not like I had to follow one specific path to success. It was also a nice nod to the conceit of being part of an underground group of outgunned people fighting a larger force with any tactics they can. 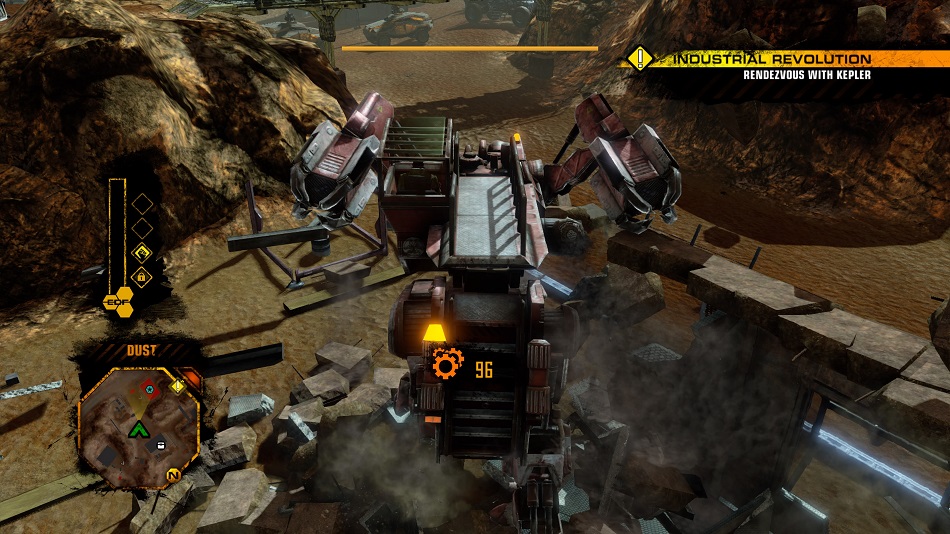 Unfortunately, even though it was a joy to go play this game again and smash things to smithereens after so many years, I was less enthused with the port.

Guerrilla looks clean and much less blurry than it did last gen — the UI and characters are generally crisp. The cutscenes, unfortunately, are of much lower quality. It’s likely not a fault of the port team, but it still impacts the quality of the experience.

Strangely, while I was playing on the Xbox One X with the install focused on performance, the game still stuttered in places of high destruction and action, and hitched as it was loading in a transition between areas. There’s also close and long-distance pop-in with shrubs only rendering as they appear feet from the front of a car, and distant mountains in the distance jumping into existence in a jarring fashion. I can’t tell whether this is a limitation of the engine or if it can be fixed with a patch, but I hope it’s addressed in some fashion.  Those complaints are minor, but major ones are missions that couldn’t be started and multiple crashes that required me to quit and reload my save. A patch is needed for these immediately.

Regardless, these things weren’t enough to sully the joy of going back to Mars, and the game even includes the DLC Demons from the Badlands via a menu option from the outset. For a game that’s almost ten years old, the ideas and gameplay in Red Faction: Guerilla has barely aged, and there’s still nothing like it on the market. It’s unfortunate that the engine and performance can’t do this fantastic game justice, but it remains an essential play for anyone who missed it the first time. Rating: 7.5 out of 10

Disclosures: This reissue is developed by Kaiko Games and published by THQ Nordic. It is currently available on Xbox One, PS4 and PC. This copy of the game was obtained via publisher and reviewed on the XBO-X. Approximately 13 hours of play were devoted to the single-player mode, and the game was completed. No time was spent in multiplayer modes.

Parents: According to the ESRB, this game is rated M and contains Blood,Strong Language, and Violence. The game is brutal, EDF soldiers scream in pain when they are shot, hit, electrocuted or vaporized. In one story mission the player gets to witness, through screams and words only, a woman torturing a high-ranking EDF official. The M rating is well earned.

Deaf & Hard of Hearing Gamers: All cutscenes and major mission interactions are subtitled. Ambient banter and communication is not. The game has smart design decisions like making the controller vibrate to indicate that a building is on the verge of collapsing. The game is fully playable without sound. Font size and color cannot be adjusted. 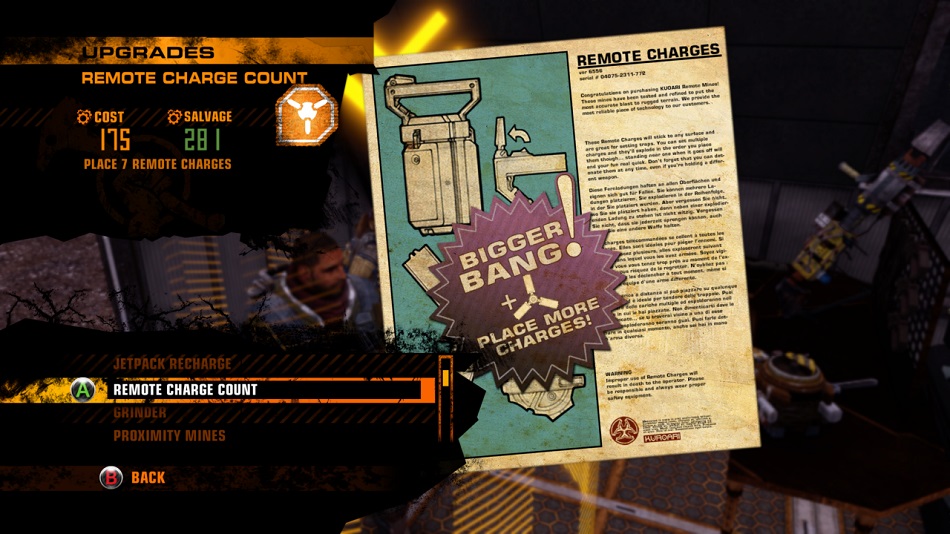 Remappable Controls: The title offers multiple control schemes but is not fully remappable. 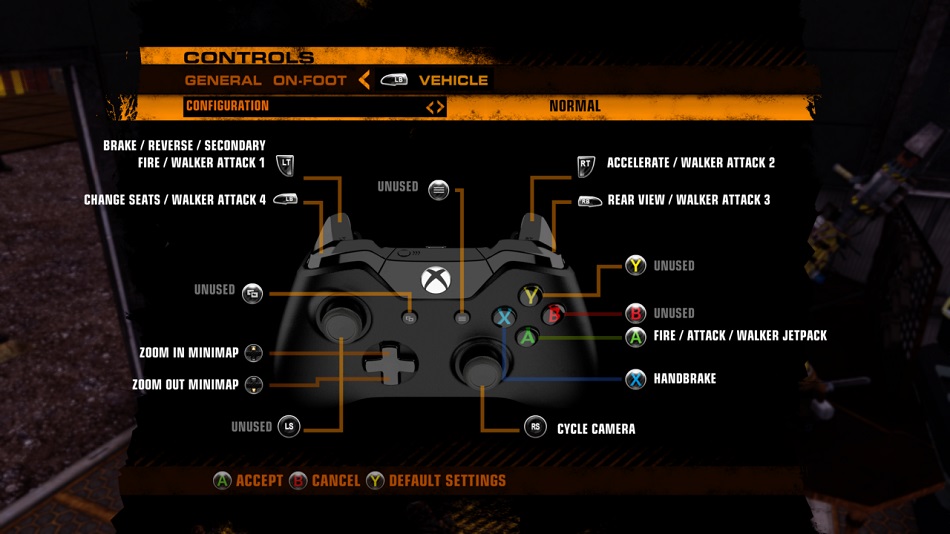 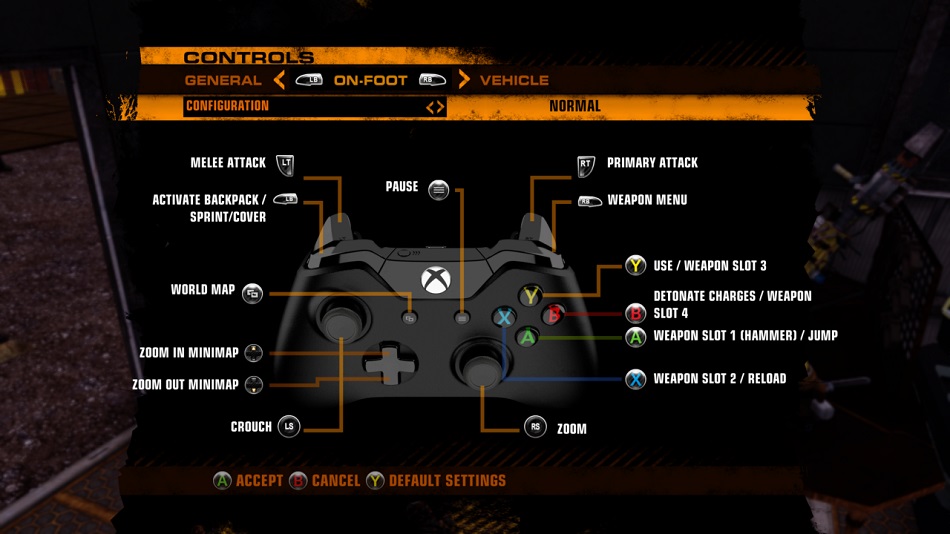 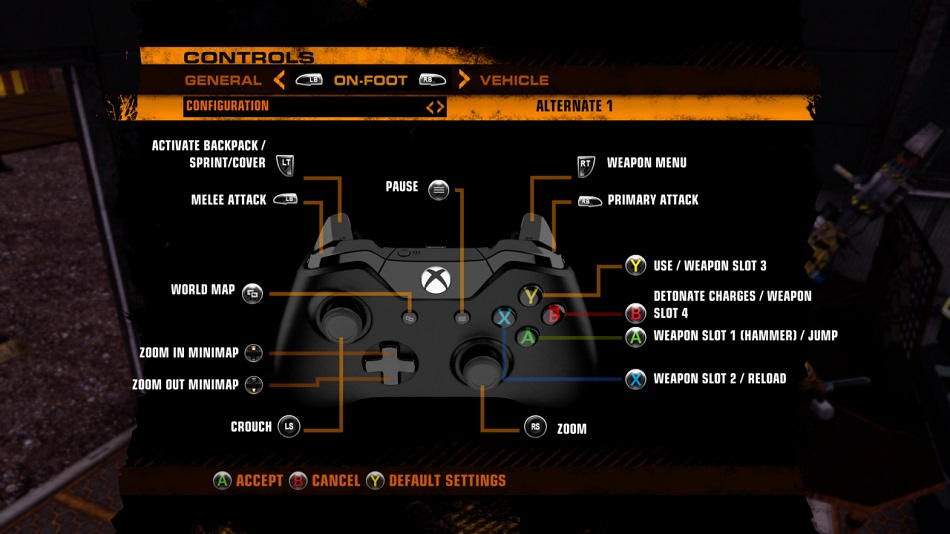 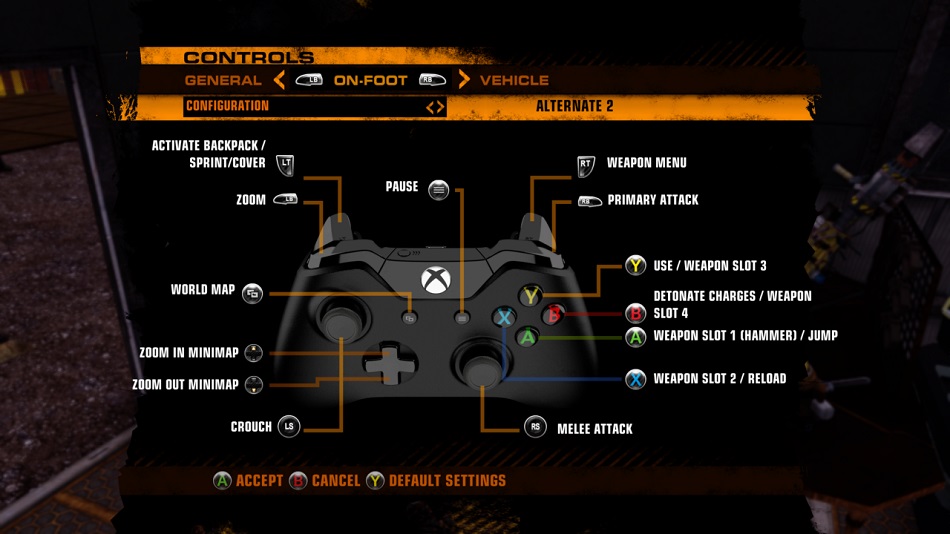 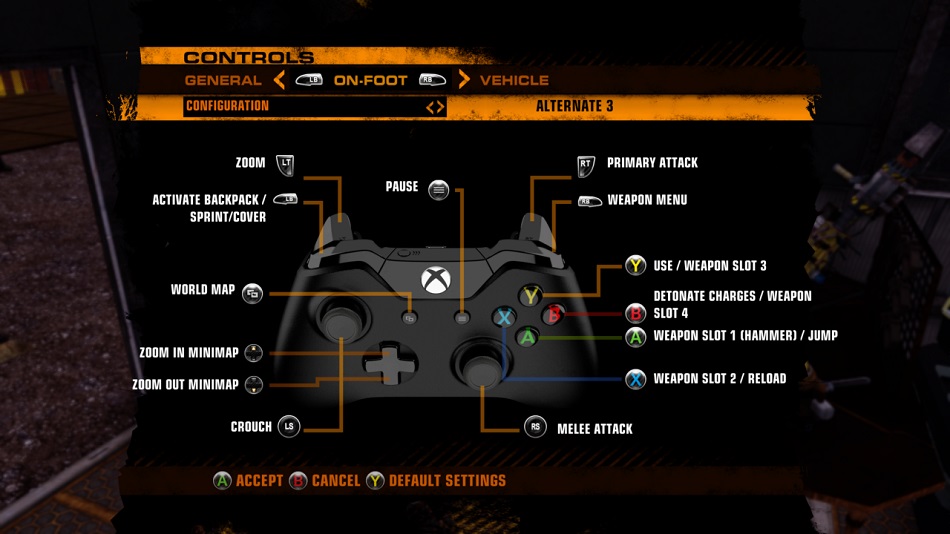 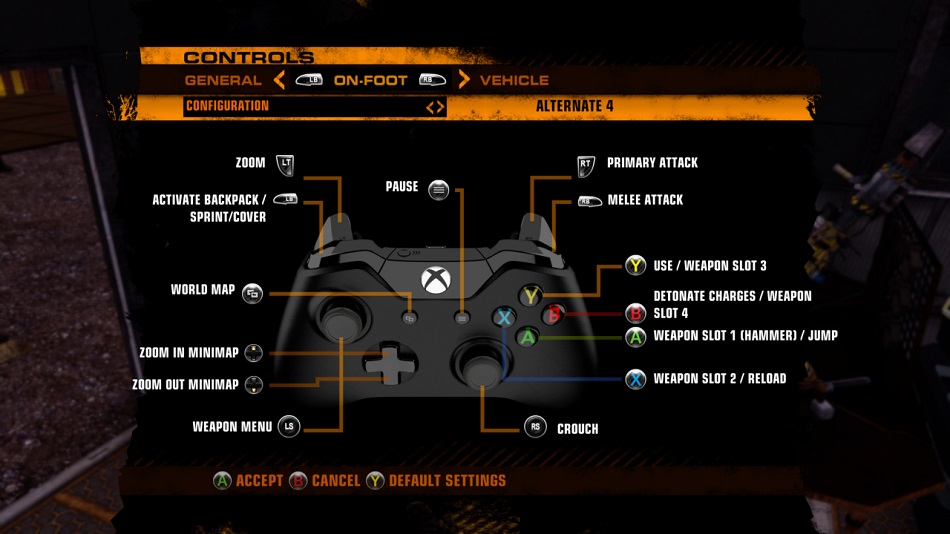 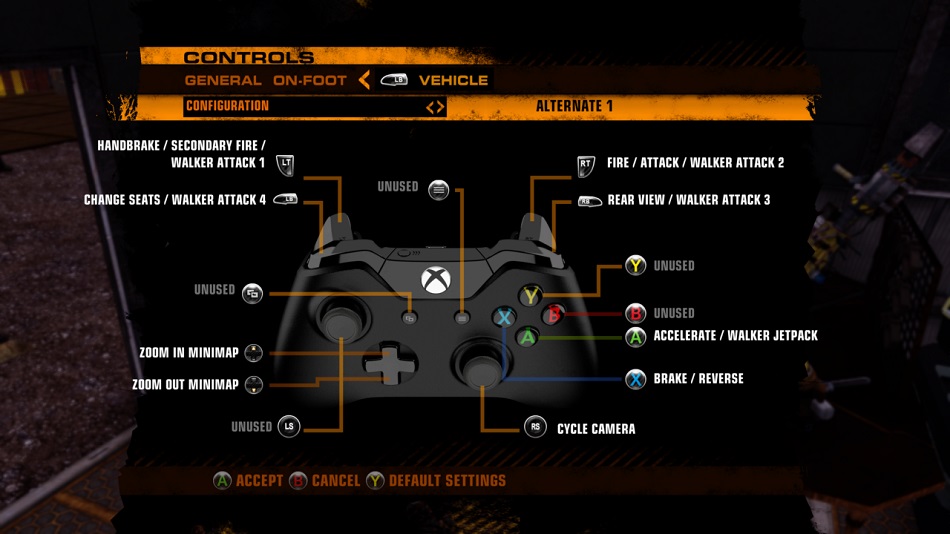 He can be found on twitter, where he welcomes screenshots of Dreamcast games and talk about Mindjack, just don’t mention that one time he was in Canada.
Latest posts by AJ Small (see all)
Tags: AJ Small Destructible Guerrilla Kaiko Games Open World Red Faction Remastered thq nordic
Subscribe
0 Comments
Inline Feedbacks
View all comments