It Neither Bites, Nor Is Magic 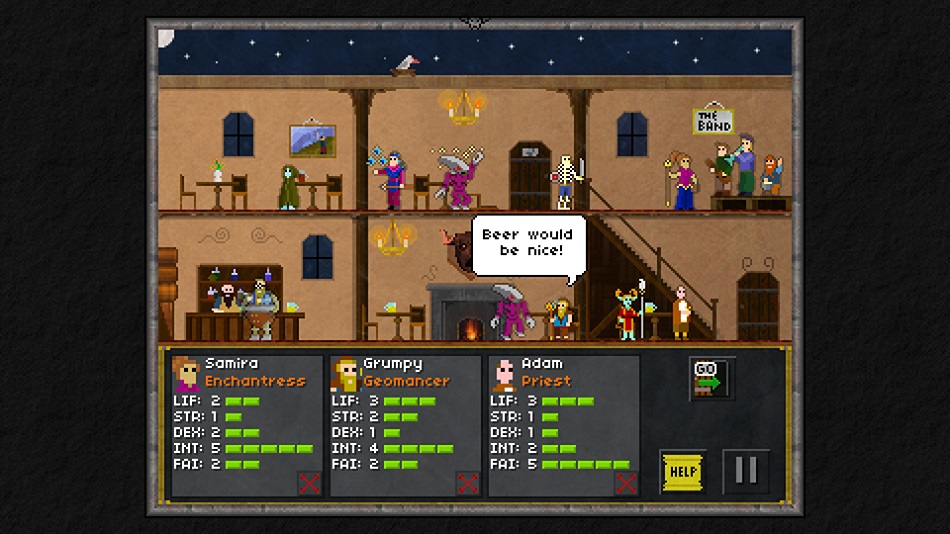 LOW It’s just as hard as Darkest Dungeon, but has less persistence.

WTF So, this is Bat Country?

Pixel Heroes: Byte & Magic is a pinch away from being a great game. With a light-hearted tone and easy-to-understand mechanics, it’s good — it just falls short due to not expanding on those mechanics in a meaningful way.

PH is a turn-based RPG based around random dungeons and loot.  It starts with the player picking a party of three from a random selection of hero types. They’re all easily-readable tropes, with priests being healers, warriors being damage dealers, bards being the usual hybrid, and so on. Later classes include neat weirdos like the Wolfrider (a brute in the frontline) and the Gadgeteer that deals in protective buffs.

Each quest is collected from a hub. The team then walks to a dungeon and goes through a series of random encounters until getting to the prescribed boss. The range of enemies is entertaining, coming in all shapes and sizes. Combat is selecting from either standard attacks (ranged or melee) or special attacks that span the spectrum of RPG standards – healing, buffs, more potent attacks, etc. To avoid spamming the most effective of these abilities, the system not only has these specials on a cooldown, but it also stops the player from picking the same hero repeatedly by putting a one-turn cooldown on them. 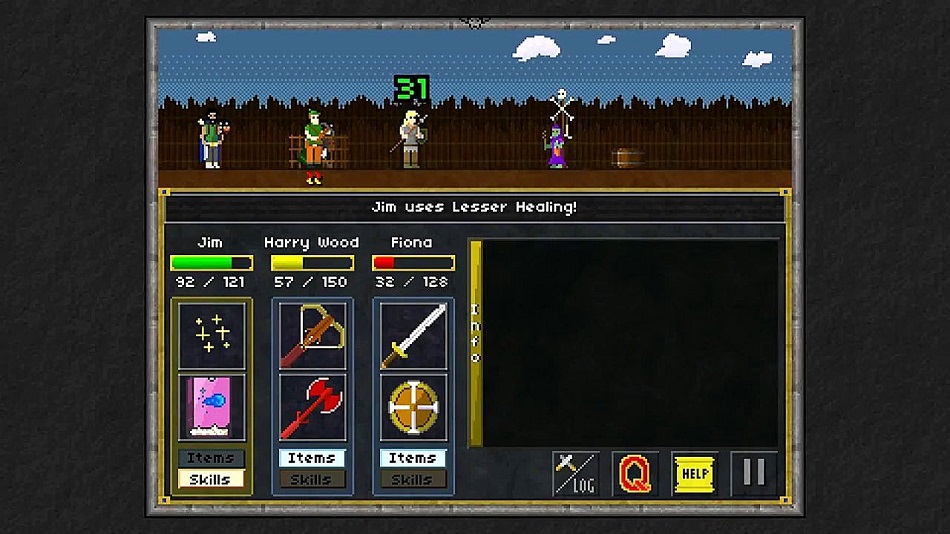 Since Pixel Heroes is so instantly accessible, it heartened me to see that the stress of similar roguelike titles was largely absent. Having an entire party get wiped is treated as no big deal — it’s just a cheery ‘Game Over’ screen and goofy cemetery with the party’s stats. However, the initial ease and sunny mood hides the fact that Pixel Heroes gets hard, fast. After a number of restarts the charm wore off, and I started to wonder what the point of all of it was, and this is something that the game fails to communicate.

With most modern entries in this genre, there’s usually some semblance of persistence — some hook that allows the player to feel like they are improving or somehow making progress despite defeats, be it a levelling mechanic or just a better familiarity of how the game works, intuited from repetition. Pixel Heroes unlocks new heroes and there seems to be some meta play with the casino in the hub town that’s never explained properly, but neither of these things was compelling enough to keep me playing.

Further eroding my goodwill was the fact that each monster has different weaknesses and requires experimenting with melee, magic and ranged (including elemental variants) to see what works. Short of keeping an excel spreadsheet, there was no way I could keep track of all the deviations. The dungeons don’t appear to be themed either, so there’s no way to equip optimally for anything besides the pre-set bosses since each encounter is random. Maybe this level of untracked density is a callback to early ’80s RPGs, but who wants to get out a pen and paper these days?

Pixel Heroes has playful writing and art, but there isn’t enough here to warrant sticking around for more than a few hours of retro-themed dalliance. Rating: 5 out of 10

Disclosures: This game is developed by The Bitfather and published by Headup Games It is currently available on XBO, PS4, iOS, and PC. This copy of the game was obtained via publisher and reviewed on the XBO. Approximately 9 hours of play were devoted to the single-player mode, and the game was not completed. There are no multiplayer modes.

Parents: According to the ESRB, this game is rated T and contains Violence, Blood, Mild Language, Use of Alcohol and Tobacco. It’s gory for a pixel game but is hardly worth the rating review, and I would say even preteens will remain unperturbed by this game.

Deaf & Hard of Hearing Gamers: The entire game is text based and there are no audio cues required.

He can be found on twitter, where he welcomes screenshots of Dreamcast games and talk about Mindjack, just don’t mention that one time he was in Canada.
Latest posts by AJ Small (see all)
Tags: AJ Small headup games indie Pixel Heroes: Byte & Magic review Roguelike rpg The Bitfather
Subscribe
0 Comments
Inline Feedbacks
View all comments