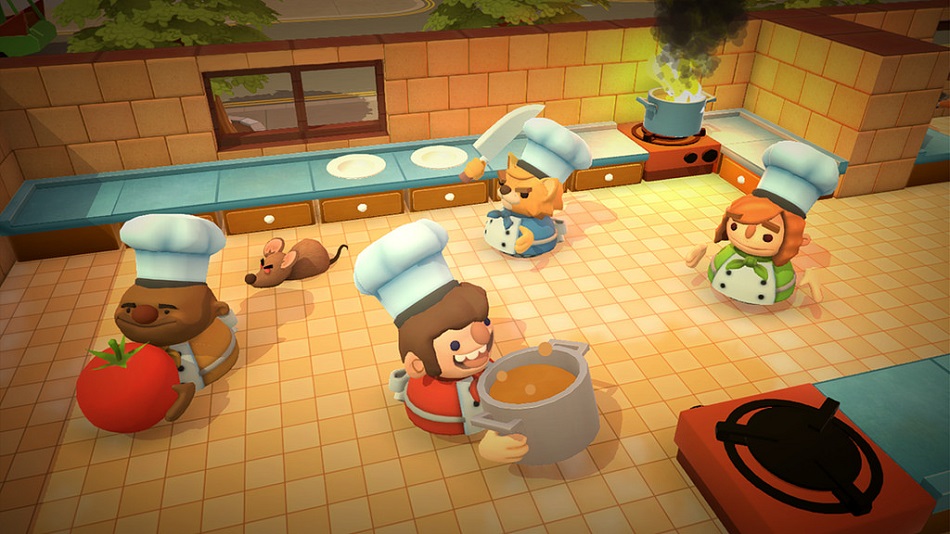 HIGH Delivering a dish with only seconds before the buzzer and getting maximum score.

LOW The moment when things go horribly wrong and I wonder if I’ll be sleeping on the couch.

WTF I am a time travelling chef fighting the forces of evil.

This release from Ghost Town Games is an isometric party title, with each level set on a single screen. The objective is to cook a certain number of dishes within a time limit — it sounds simple, but it’s actually a superlative experience that uses its level design and mechanics in a manner that effortlessly encourages teamwork and planning, punishing anyone who doesn’t live by those rules.

The narrative that ties all of this together gives the game an extra level of special. In the future, a monster descends upon earth and demands to be fed. It’s up to the two top cooks on Earth to do so, or the monster will destroy the planet. They fail, but are rescued by a time traveller and his dog. (Yes, really.) From there they embark on a trip through various decades in order to become the best at cooking all dishes… At least, all dishes that consist of fast-food, but whatever.

The inputs are simple. In singleplayer, there are two chefs to switch between, but moving, performing an action, and picking up are the only things that a player must figure out. These are sensibly mapped to two face buttons on the controller — one to pick up plates and pots, another to execute a contextual action such as ‘wash a plate’ or ‘knead dough’. The complexity comes in timing and coordination, as each workstation or oven is positioned in a different place and there are hazards in the way that the player must negotiate to run between the different points.

For example, to make a burger the player must tenderize and cook a patty, dice a tomato, chop lettuce and put it all together on a bun, have it all on a plate, and then run over to the serving station and send it out into the restaurant — an easy-to-grasp idea until one factors in that each level is a combination of moving parts meant to thwart players, and that players will want to have multiple dishes going at once in order to to optimize their final score. 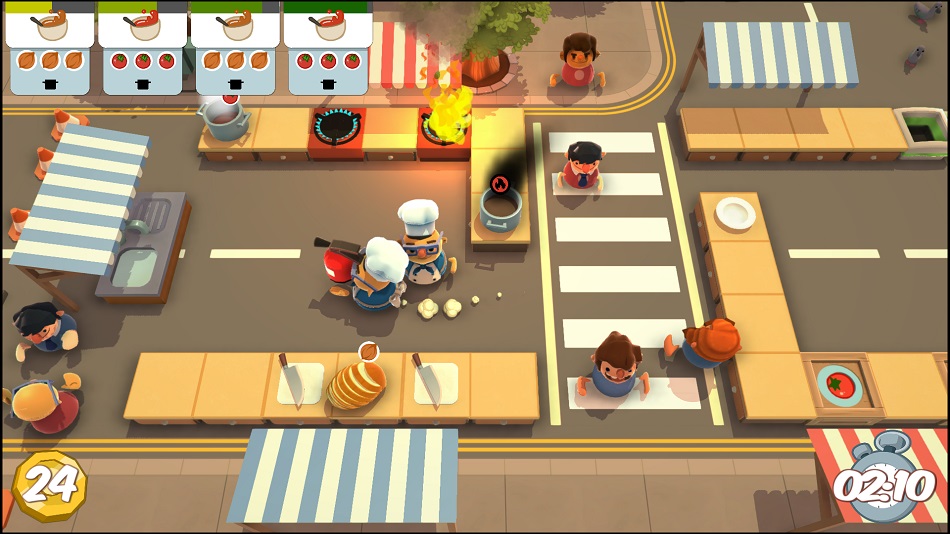 The more dishes delivered, the higher the score and the better the rating. Delivering wrong dishes wastes time and scores no points. Fail to produce a meal on time and points are deducted.

While the singleplayer is great, where Overcooked! shines is the co-op, and the back-and-forth between two people in the campaign missions is pure drama. When my partner and I clicked, it felt like two people acting as one, and the exhilaration of hopping between moving trucks with a half-cooked fajita, or skating across a fiery pit to drop soup where it belongs is fantastic. Being able to look at my partner and nod ‘I got you’ while the blood in my temples pulses as the final seconds tick away… I finally understand how sports fans feel.

At the same time, success in Overcooked! wouldn’t mean as much without the gut-crunch of failure. Plates are dropped, incorrect assumptions are made, shouts of not there! and what were you thinking? are uttered. Once, the time required on a hot plate was miscalculated while we were both collecting ingredients for a pizza, and the fallout engulfed an entire portion of our kitchen in flames. It is in in these times when the bonds of a relationship are tested. Be warned.

Still, this tension is what makes Overcooked! fantastic. The light, breezy music, cheery character models and silly storyline hide a challenging, almost cutthroat game. The appearance of simplicity belies the manual and social coordination required to get the maximum scores, and the seasonal DLC now bundled with most versions is great in a teeth-clenching way, and will test the mettle of even the most hardened gastronomists.

Overcooked! is an essential purchase for anyone looking for an unforgiving but fair, exasperating but enlivening party game for friends that hopefully won’t end the night as enemies. It is a thing as close to perfect as I have played in a long time. Rating: 9.5 out of 10

Disclosures: This game is developed by Ghost Town Games Ltd and published by Team 17.  It is currently available on Nintendo Switch, PlayStation 4, PC, and Xbox One. This copy of the game was obtained via Paid Download and reviewed on the Xbox One. Approximately 7 hours of play were devoted to the single-player mode, and the game was completed. 23 hours of play were spent in multiplayer modes.

Parents: According to the ESRB, this game is rated E for Everyone and contains Mild Cartoon Violence. Everything in the game is very lighthearted, but the visuals hide a game that most young kids will find frustrating.

Deaf & Hard of Hearing Gamers: There are some audio cues that are not visually represented very effectively.

He can be found on twitter, where he welcomes screenshots of Dreamcast games and talk about Mindjack, just don’t mention that one time he was in Canada.
Latest posts by AJ Small (see all)
Tags: AJ Small Ghost Town Games Overcooked! review Team 17 Xbox One
Subscribe
0 Comments
Inline Feedbacks
View all comments