A Bit Of A Blackout 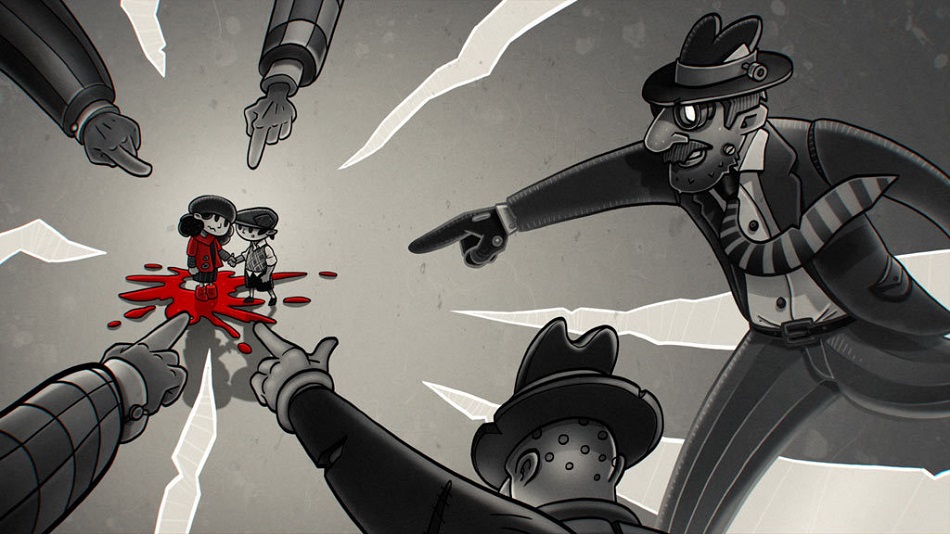 HIGH The usage of magical realism.

Remember the number 138 — it’s the solution to a rough time in the middle of My Memory of Us. It’s an incongruous, awkward moment in an otherwise smooth 2D puzzle-platformer that stopped me dead in my tracks. Keep this number in mind, and thank me later.

My Memory of Us starts with a young girl meeting an old man in a crumbling building. The old man says that she reminds him of someone he knew when he was kid, and of the friendship that they had. At this point, the game flashes back to childhood when his country went to war with a group of goose stepping, black-clad robots… And the people lost. Details of the segregation that followed the robots’ occupation follows. This is smartly framed through the eyes of the old man (now young) and his friend, a device which allows for big-picture impact of the occupation in cutscenes while the mechanics and gameplay focus more on the individual effects. 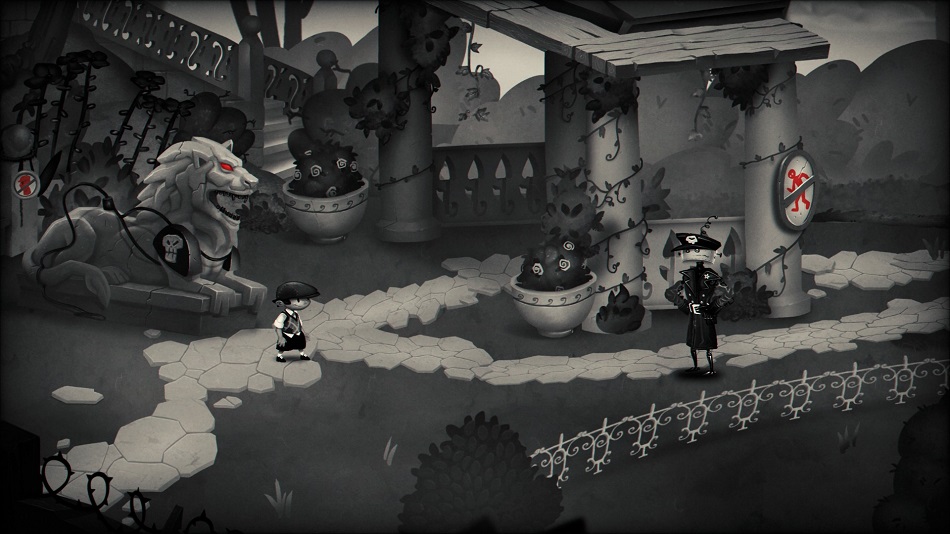 The developer, Juggler Games, use their country’s, Poland, history during the second World War as template for the old man’s story, and the narrative smartly uses magical realism to dampen the harsh realities of things like the Warsaw uprising and the Holocaust. He admits to embellishing some of the events as he talks with the girl, although the characters sprinkled throughout the story are based on real-life people that lived and died, during the uprising. Peeling it all back, though, it’s clear that Nazis are the bumbling evil automatons, some people are painted red, and the robots encourage the rest of the population to hate and ostracize them in a way similar to how like the Warsaw Ghetto was used to imprison Jews.

The art style resembles western comics of the period — all black and white, with the shock of red clothes standing out. In part, I saw this as a likely homage to the girl in the red coat from Schindler’s List. It works well for the story the game wants to tell. The puzzles and action, however, are a little lacking.

The puzzles range from extremely simplistic (switch to the character that can interact with this feature then go here to pick up this item, take it to this point, and repeat) to some genuine headscratchers (remember 138) with the interesting, brain teasers being few and far between. The action is mainly stealth, with a couple of rhythm action minigames and races. While this action is fine, it feels more like a means of extending the game rather than something that enriches the experience. 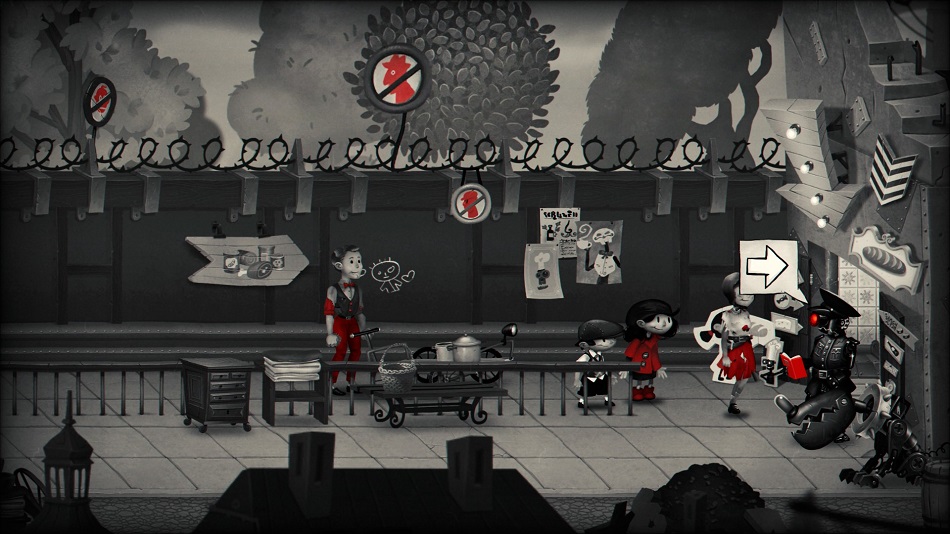 Sadly, the controls are also not as responsive as I would like. A key mechanic is that the two main characters can hold hands at the press of a button, this is used as a means for solving puzzles . The problem is that it doesn’t always work, and when it does, it’s not always clear that it has. The characters take shuffling steps that don’t feel right, and it becomes especially annoying during one section where the game requires precision to avoid insta-death lasers. Overall, most of my failures during the story felt like they were due to the lack of tuning in the controls.

Even with some bum sections and controls that aren’t great, the art style and story focuses on a country that was heavily impacted by fascism — aftershocks are still felt there every Independence Day when Neo-Nazis and Antifa fight each other – and this narrative isn’t often told in this medium. The developers attempt to eschew politics, but their work is a good solicitation against repeating the mistakes of the past, and a compelling argument for compassion in the current climate. Rating: 6.5 out of 10

Disclosures: This game is developed by Juggler Games and published by IMGN.PRO. It is currently available on PC, PS4 and XBO. This copy of the game was obtained via publisher and reviewed on the XBO. Approximately 7 hours were devoted to the single-player mode, and the game was completed. There are no multiplayer modes.

Parents: According to the ESRB, this game is rated E10+ and contains Mild Violence, Use of Alcohol and Tobacco. The themes in this game are extremely dark — there’s no explicit blood but characters get vaporized, old people are buried and sympathetic characters walk to their doom, surrounded by equally-doomed children. Though not graphic, I would consider these moments potentially traumatizing.

Deaf & Hard of Hearing Gamers: By default the subtitles are on, and most of the in-game interactions are done through speech bubbles. The game is fully playable without sound. Text cannot be resized. 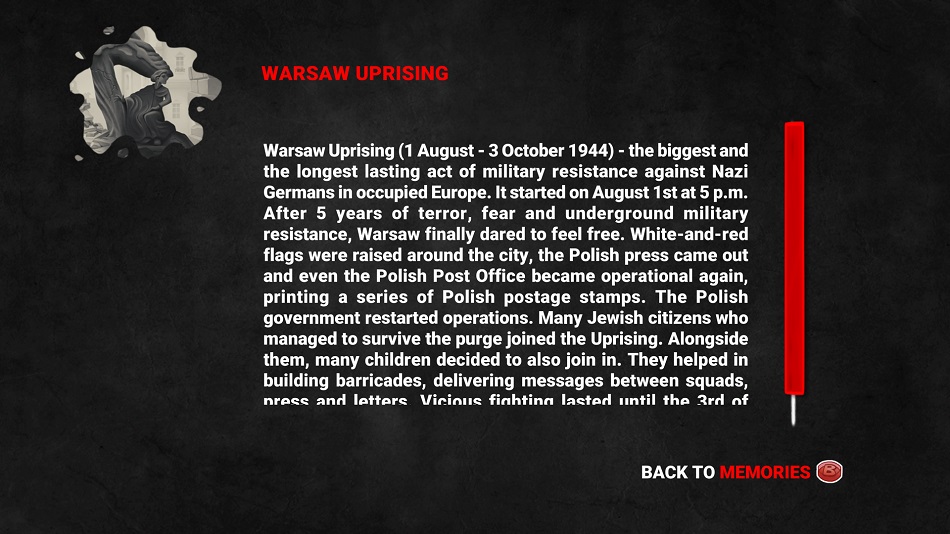 Remappable Controls: No, this game’s controls are not remappable. There is no control diagram. The right stick is used for moving the characters, The A and X button are used for interacting with the environment, the Y button is used for holding hands, the right trigger is used for special abilities, the right bumper switches between the two playable characters, and the left bumper is used for context-sensitive abilities.

He can be found on twitter, where he welcomes screenshots of Dreamcast games and talk about Mindjack, just don’t mention that one time he was in Canada.
Latest posts by AJ Small (see all)
Tags: AJ Small Art imgn.pro indie Juggler Games My Memory of Us Poland review WWII Xbox One
Subscribe
0 Comments
Inline Feedbacks
View all comments