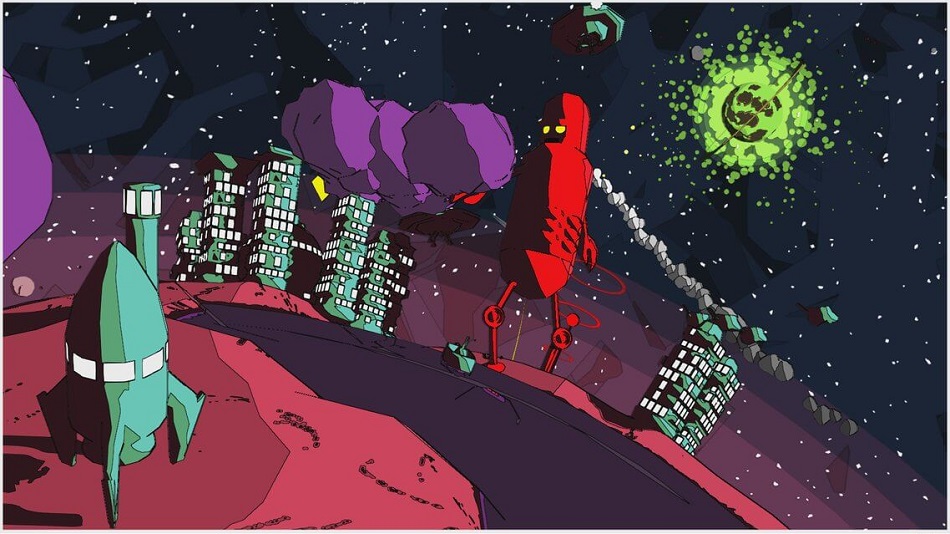 WTF Ethics go out the window when under threat.

Going back through Brad’s review of Jettomero, I find very little to argue with when it comes to what he found mechanically at fault. I also agree with some of his conclusions on the themes, based on what he played. There is a sense of emptiness to the experience, true — however, while he was deeply unhappy with the result, I was pleased with the unhappiness of the supposed finale. It also raises questions of authorial intent.

The game presents itself as a cutesy space exploration romp. Jettomero, the titular hero, is a crimson robot that dwarfs moons in terms of size. It soars through star systems, methodically landing on each planet to clumsily stumble around attempting to save humanity. It does this by engaging in fights with equally-sized monsters in Quick Time Events. Each collection of planets appears to be procedurally generated, so the urge is to explore and keep on trying to save humanity no matter how often they try to defeat Jettomero’s indestructible form.

The game appears to support this No Man’s Sky approach, but any sandbox/open-world intent is more in line with Keita Takahata’s Noby Noby Boy. When indulging in these elements it feels more like a toy — something to interact with and set one’s own objectives on. Outside of these play elements, Jettomero is a compelling, linear story about ethical compromise in the face of vast human loss, of good intentions wreaking havoc, and of the futility of an individual life – even if that individual is so big that standing on a planet’s surface results in its head leaving the atmosphere.

Jettomero presumes it was built with a purpose. Devoid of memories, it proceeds to stumble through every encounter. Thanks to the deliberately-difficult handling, it’s almost impossible for the player to not cause carnage wherever they steer the hulking, red automaton. This gaucheness results in Jettomero crushing cities, decimating forests, and inciting environmental catastrophes. The robot, in hideously adorable fashion, will constantly apologise and act surprised that the humans try and take it down with whatever defenses they have. It carries on like the machine it is, because to stop is to lose any sense of purpose. However, that purpose might not be what Jettomero expects because the memories that unlock as the game carries on tell a different story.

Brad talked about Jettomero‘s ending resulting in a vacuum. With all memories unlocked and a decision made, there felt like very little to do:

“I made that choice, and then the game apparently continues on forever. There was no satisfactory ending, no further story or events to witness… Just nothing.” 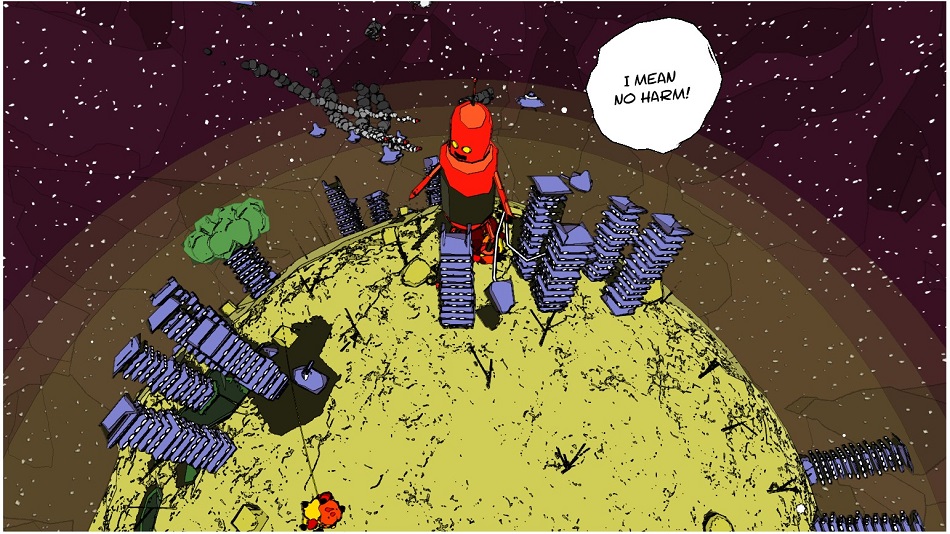 For me, that ending was supporting the story. Jettomero only has one purpose, and when that purpose seems like it can never be achieved… Well, just imagine a lumbering, sentient, orange juicer in an infinite space where it will never find an orange.

Ultimately, this was Jettomero: Hero of the Universe’s message to me. There was never going to be anything new to see, no incentive to carry on no matter how vivid the next solar system might look. Jettomero’s continuing existence is as hollow as an empty juicer.

If that was all there was to say then I would consider this second opinion to be a fine companion piece. The problem is that, unlike my good editor, I found the true hidden ending and it changed my perspective on the game and the developers’ intentions.

This true ending isn’t indicated on map waypoints and requires the player to do a little bit of extra exploring. If found, I think it offers a final moment of hope to the whole affair. I can’t say more in order to avoid spoilers, but I can say that I was a little disappointed that my initial impression of Jettomero as a dayglo tribute to nihilism doesn’t hold up.

So, all this makes me wonder what the artist’s intent with Jettomero was? What was it trying to say? There’s one good interview on Gamasutra but it doesn’t answer all my questions. With both my interpretation and Brad’s feeling so absolutely opposite, what was the developer aiming for?

Regardless of the intent, I think it’s worth mentioning that there’s a third interpretation as well… A friend came over, picked up the game and was instantly besotted with the art style and its jittery protagonist. She carefully made her way through the first few planets, but the look on her face when she inevitably crushed her first building was priceless. Horrified, she declared that she didn’t want to play anymore. Ten minutes later, she laid waste to an entire galaxy because the humans kept shooting at her and she wanted to teach them a lesson.

Disclosures: This game is developed by Ghost Time Games and published by Beefjack. It is currently available on XBO and PC. This copy of the game was obtained via digital purchase and reviewed on the XBO. Approximately 6 hours of play were devoted to the single-player mode, and the game was completed twice. There are no multiplayer modes.

He can be found on twitter, where he welcomes screenshots of Dreamcast games and talk about Mindjack, just don’t mention that one time he was in Canada.
Latest posts by AJ Small (see all)
Tags: AJ Small Beefjack Ghost Time Games indie Jettomero Second Opinion
Subscribe
0 Comments
Inline Feedbacks
View all comments