It’s A Long Way Down 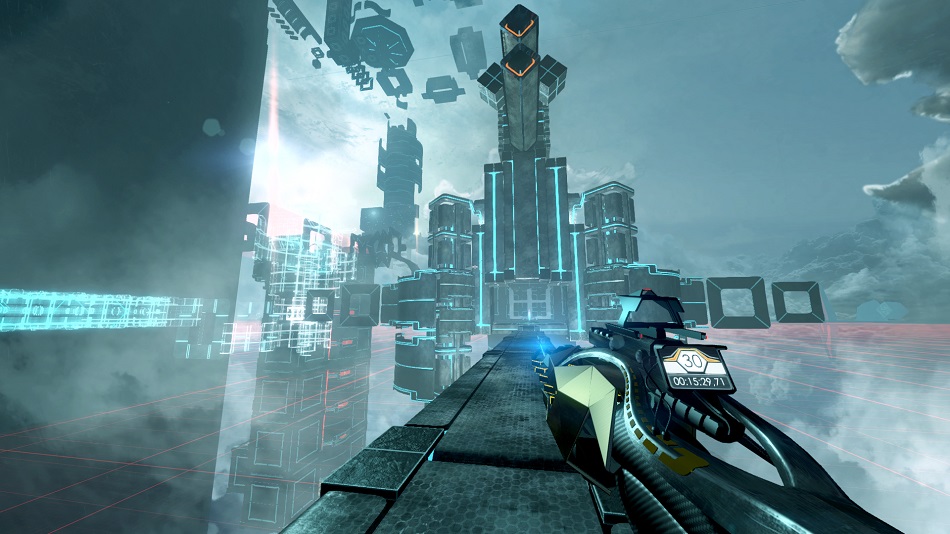 HIGH Witnessing the breathtaking scale of the last level.

LOW How many times did I die? Oh, there is an achievement for that… Dammit, I suck!

WTF And all of this means…?

Deadcore is a first-person platformer developed by 5 Bits Games and set in a neon-tech world full of abstract shapes and floating planes. Every level is a twitch-based challenge of tight jumping that only the most hardened will persevere through — this is both its strength and weakness.

My first few rounds with Deadcore were deeply unpleasant. Within minutes of introducing me to the basic mechanics of running and double jumping, the game expected me to be performing polygon-perfect jumps, or else I would end up falling to my death.

I did a lot of falling.

Due to the requirement for precision on every jump and the punishment of repeating sections after a failure, few will make it past the first level. I hung in there and discovered that once I got over this first bump with little in the way of reward from the game, Deadcore gets good.

The game drip-feeds abilities – first a double jump and using a pulse gun to deactivate enemies, but eventually a charged dash and an awkward rocket-powered jump (I had to watch a walkthrough video to figure out how to use it!) are added to the repertoire.

Each area has multiple routes through — at least one ‘easy’ path with the others much more difficult, although usually shorter in terms of distance to cover.

Rotating platforms, death lasers, bothersome bots and inverted gravity generators all lie in wait. The levels are cruelly, smartly laid out, but rewarding once each pattern is mastered. However, I’d guess that trying to figure out that pattern will break most people because Deadcore delights in leaving its worst moment until just before a checkpoint. 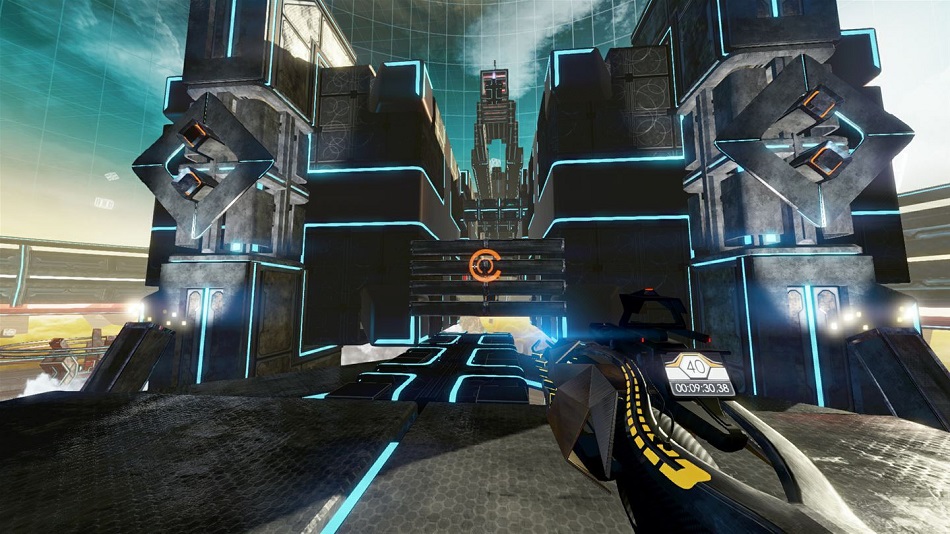 I would beat the first part of a run over and over again, only to be caught off guard by a last-minute rotating laser on a ceiling, meaning that I’d have to redo the last two minutes of mind-boggling platforming. In some cases, I missed checkpoints entirely and then died, only to find myself having to repeat much longer sections!

These runs could become so nerve-wracking that I could only play in 10-15 minute bursts before stepping away for several hours before I went back. However, back to it I always went — the higher I got in the game, the more I wanted to see what it would throw at me next.

Design-wise, Deadcore keeps up its inventiveness – besides the demanding jumping, I often found myself walking upside down along narrow paths, running through a rotating cylinder with laser walls that disintegrate on touch, or dashing through rooms as the walls closed around me.

While the mechanics kept me in, the narrative was less than compelling. The story is told in piecemeal bits, and since the main objective is to finish a level as quickly as possible, I found that slowing down to explore for collectibles offering snippets of the tale was a decision at odds with the game as a whole.

By the time I finally saw the last level, it felt like Deadcore had run me through a wringer. What I really want to see is the game played by an expert speed-runner —  it seems ripe for sequence-breaking and exploits, to the point where I think the developers would welcome these ‘cheats’ as features rather than bugs. They even dedicate a menu option to speed-running, enabling players able to set up their own ‘playlists’ of areas to attempt. It seems they know their true audience.

I can only recommend Deadcore to speed-runners or the most dedicated of players, but those that get through the initial challenge will find a deep title that successfully translates many hardcore 2D elements into the third dimension. Everyone not in those two categories? Avoid. Rating: 7 out of 10

Disclosures: This game is developed by Grip Digital s.r.o and 5 Bits Games, and published by Grip Digital s.r.o. It is currently available on PC, Mac, Linux, Xbox One and PS4. This copy of the game was obtained via publisher and reviewed on the Xbox One. Approximately 11 hours of play were devoted to the single-player mode, and the game was completed. There are no multiplayer modes.

Parents: According to the ESRB, this game is rated E and contains Mild Fantasy Violence. The world is abstract and there are enemy robots that can be deactivated temporarily with shots. There’s nothing disturbing here, but the game is very hard.

Deaf & Hard of Hearing Gamers: The game has little to no text, and most things must be intuited visually. Certain audio cues are beneficial (like triggering a checkpoint) but not required for successful play.

Remappable Controls: Only certain functions are remappable. The sensitivity can be adjusted and the Y axis can be inverted.

He can be found on twitter, where he welcomes screenshots of Dreamcast games and talk about Mindjack, just don’t mention that one time he was in Canada.
Latest posts by AJ Small (see all)
Tags: 5 Bits Games AJ Small Deadcore First-Person Grip Digital indie Platformer review Xbox One
Subscribe
0 Comments
Inline Feedbacks
View all comments