How I Learned To Stop Worrying And Love The Bomb 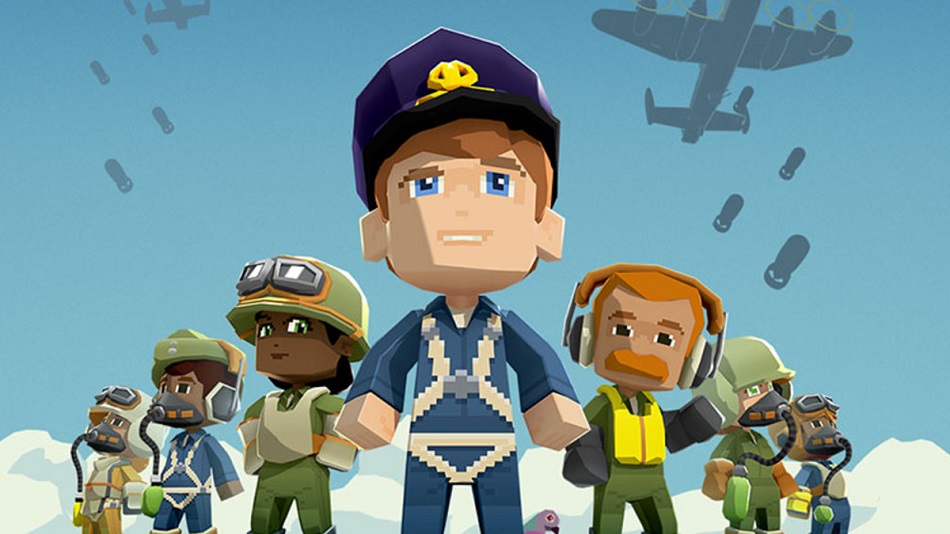 HIGH Landing beaten and bloodied after a successful mission.

LOW Not figuring out how to apply first aid in time.

WTF Those pigeon sounds on the title screen.

My bomber is descending over Belgium when the first fighters open fire on me.

My tail and ventral gunners find their assigned targets and light them up, tracer fire arcing out into the night sky. An alert from my radar operator pops up to warn me that an ace fighter is in the region.

I redirect my bomb operator from the nose turret to the bombing area and have him open the doors for the payload. Before completion, bullets rip through the fuselage and damage the hydraulics. Cursing, I send my engineer for repairs as my bomber floats almost comically hopeless towards our target.

The ace fighter zeroes in on us and opens fire. One of the engines bursts into flames, so I send my navigator out onto the wing with an extinguisher. The engineer announces that the hydraulics are fixed and my two gunners whir into action, firing at the ace and his entourage.

The bomb bay doors open, and the pilot realigns with the target. The navigator makes it back inside the armored bomber’s hull as the payload is dropped successfully. I tell my pilot to ascend and have the engineer use his Boost ability on the fuel supply to speed it up. As we rise, I know that the fighters chasing can’t ascend that high and the ace utters curses as the gunners focus fire on him and his plane explodes in flames.

My bomber and its crew are safe, for now. 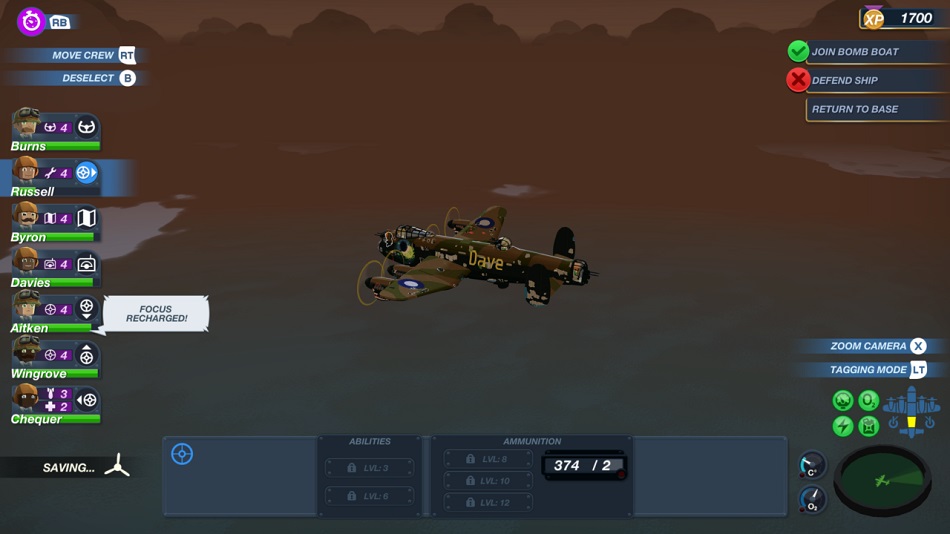 Bomber Crew is part management sim, part roguelike. The premise is that the player manages a team of seven cartoon-like men and women as they fly from England to Europe on bombing missions during World War II. Completing missions, shooting down enemies and taking photos of special targets gains money and EXP that can be invested in the bomber and its crew to improve stats, equipment, or gear for the bomber itself. After a set number of missions, a Critical Mission will be unlocked. A win here means further stages with increased difficulty and more unlocks become available.

After the bomber takes off, the player can shift between a zoomed-in internal view to manage the crew inside the bomber, or a zoomed-out view for a wider perspective of the terrain, incoming fighters, and so on.

At first, the sheer number of things that need tweaking and monitoring can be overwhelming. The tutorial gives the player a basic understanding of how to move crew between different stations inside the bomber, how to administer first aid, how to raise the landing gears and drop payloads on targets. However, it doesn’t prepare one for later challenges like reloading guns, switching fuel to a specific set of tanks, or how to smartly assign custom waypoints via the navigator to avoid flak. To be fair, this element of self-taught learning felt very much in line with how many roguelites operate, and there was an elation to figuring stuff out that wasn’t handed to me in a series of pop-ups.

While I found much of Bomber Crew to be rewarding, there are some problems that arise from its design. 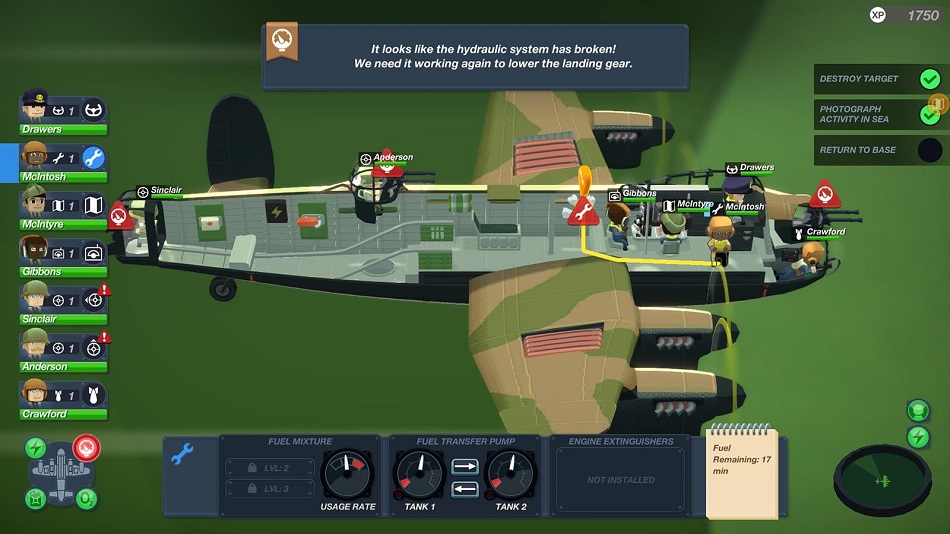 The first? When things go wrong, they go wrong fast. Such misfortune is likely to result in most (if not all) of the crew being wiped out and the plane lost. A destroyed bomber and crew with reduced stats will replace the old one, but this means that some basic missions will have be taken on to ‘grind’ them up to scratch. This re-leveling isn’t too much of a hill to climb early on, but a loss in later stages means that it’s sometimes best to restart the whole game rather than limping ahead.

During one run, I made it into the third stage on my first go, then made a poorly-judged emergency landing that sent my entire crew up in a ball of flames. I then had to grind for enough EXP to take on the next Critical Mission, but my new crew and plane weren’t tough enough to survive even short, low threat missions. I quit and restarted from the beginning, and by applying what I knew and spending money on vital upgrades, I was able to get back there quickly. However, I would have preferred a hard fail-state to signal when I should try a new run, similar to the way most roguelikes do. Under the current system, trying to level up a replacement crew feels like a demoralizing failure-loop that isn’t educational in terms of how best to proceed.

The other, less obvious detractor to sudden team-wipes is that it creates a distance between the player and the crew. It’s hard to spend time investing in characters and doesn’t seem worth naming them after friends if there’s a real chance that they might all die instantly at any time, and getting frequent team wipes disincentivizes caring about them. Such personalization and connection is key to games like XCOM where losing someone feels like losing family. The first time I had to land a plane with the cold body of my engineer rolling around the fuselage was heartbreaking. All the subsequent times? They were just meat for the grinder.

Bomber Crew is a fantastic first achievement, and flitting between micro and macro management is both stressful and rewarding in equal measure. That said, the game can’t decide if it wants to be a quirky management sim or a hardcore roguelike, so splitting the difference has weakened the whole. Rating: 7 out of 10

Disclosures: This game is developed by Runner Duck and published by Curve Digital It is currently available on Xbox One, PS4, PC, and Switch. This copy of the game was obtained via publisher code and reviewed on the XBO-X. approximately 10 hours of play were devoted to the single-player mode, and the game was not completed. There are no multiplayer modes.

Parents: According to the ESRB, this game is rated E10+ and contains Fantasy Violence, Mild Language. The deaths of the crew can be upsetting as they ragdoll around the fuselage of the plane, but ignoring that, the game is cartoony and cheerful for the most part. However, it’s going to be very hard for anyone under a certain age, and I would not recommend it to younger audiences based on that merit alone.

Deaf & Hard of Hearing Gamers: The game is fully playable without sound as things like attacking fighters, crew deaths and any other warnings are displayed in written prompts. Unfortunately, these prompts can be quite small and hard to see from a distance, and the text cannot be resized. 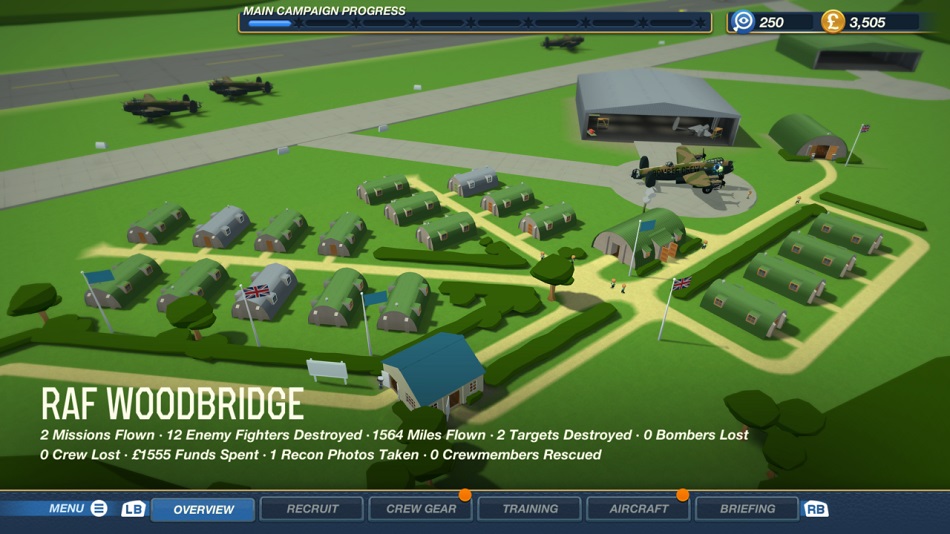 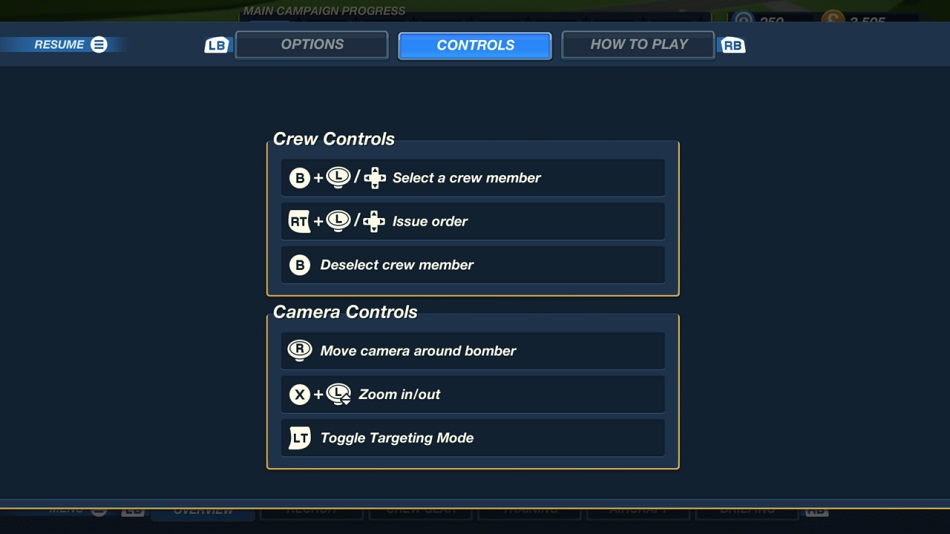 He can be found on twitter, where he welcomes screenshots of Dreamcast games and talk about Mindjack, just don’t mention that one time he was in Canada.
Latest posts by AJ Small (see all)
Tags: AJ Small Bomber Crew Curve Digital iOS review Runner Duck Sim WWII Xbox One
Subscribe
0 Comments
Inline Feedbacks
View all comments